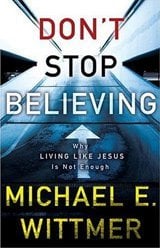 Michael Wittmer feels trapped in the middle. To one side are conservative Christians demanding lockstep allegiance to narrow doctrinal statements–statements so detailed that they insist on specific theories of the end times or specific understandings of the spiritual gifts. Such people interpret doubts, questions, or appreciation for other viewpoints to be the first signs of an inevitable slide to liberalism. On the other side are postmodern Christians who question many traditional assumptions–or maybe even every traditional assumption–but who go about it in ways that discredit their arguments; they offer new and novel interpretations of key Scripture texts and refuse to state exactly what they believe. To the one side are those who want to believe like Jesus while on the other are those who want to live like Jesus; to the one side are those who love their beliefs while to the other are those who believe in their love. Each position is polarizing and each position seems to offer something less than a robustly biblical faith.

Wittmer’s position on the conflict between conservatism and postmodernism shows itself in the book’s subtitle: “Why Living Like Jesus Is Not Enough.” A professor of Systematic and Historical Theology at Grand Rapids Theological Seminary, he is clearly not a person who has recklessly jettisoned theology in order to pursue theology-free living like Jesus. This book is his measured reaction against the postmodern tendency to live like Jesus at the expense of sound theology.

“My goal,” he says, “is not to define a certain segment of Christianity but merely to examine the specific questions that many postmodern Christians are asking.” The book, he says, is a friendly warning that rejecting abuses may well lead to a slide into equal and opposite errors. “The history of the church is a series of pendulum swings, and right now the momentum seems headed toward Christian practice and away from Christian belief. This book is an argument for both. …This book seeks to avoid the most extreme forms of both conservative and postmodern Christianity and hit the sweet spot of appropriate tolerance.”

And so Wittmer seeks to craft a third way, a way that avoids the extremes on either side while finding that sweet spot that allows a Christian to hold fast to what is true while retaining a love for others and a desire to serve them. He reminds the Christian that right works can only arise from right beliefs.

He blazes this trail by answering questions that are on the minds and tongues of many Christians today. Must you believe something to be saved? Do right beliefs get in the way of good works? Are people generally good or basically bad? Which is worse: homosexuals or the bigots who persecute them? Is the cross divine child abuse? Can you belong before you believe? Does the kingdom of God include non-Christians? Is hell for real and forever? Is it possible to know anything? Is the Bible God’s true Word? While each question rates its own chapter, each topic, each chapter, bridges seamlessly to the next. There are no harsh pauses and no questions that seem forced or out of place.

It bears mention that this is not a book that specifically counters the Emerging Church, though it does that incidentally. Instead, it is a book that counters the whole postmodern ethos that has found its way into contemporary Christianity. This is broader than just the Emerging Church and in this way the book is far more useful, far more widely applicable, than if Wittmer had gone specifically after only Emerging Christians.

In Don’t Stop Believing, Wittmer has written the kind of book with which every reader is likely to disagree every now and again. But he has written a book that graciously and humbly treats difficult issues that are of critical importance to the church. He brings biblical wisdom to bear on many tough questions and answers them with great care and refreshing simplicity. Having been released with little fanfare in December of this year, Don’t Stop Believing comes as a delightful year-end treat. I highly recommend it.