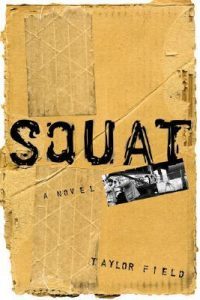 Buy from Amazon
“We live in a squat. We don’t know squat. We don’t have squat. We don’t do squat. We don’t give a squat. People say we’re not worth squat.” In the shadow of Wall Street’s wealth, homeless people with names like Squid, Saw, and Bonehead live in abandoned buildings known as “squats” where life is hand to mouth, where fear and violence fester. One of these people is Squid, an obsessive compulsive young man who has escaped normal society to live among the homeless. Squat follows a 24 hour period of his life in which he deals with the boredom and terror of living on the streets, wanders, begs, fights for his life and learns who are his true friends and who are not.

Squat is Taylor Field’s first novel. Field was worked since the mid 80’s in New York’s inner city where he pastors East Seventh Baptist Church and Graffiti Community Ministries. Working in that environment, he is clearly familiar with the people he writes about. The book has an authenticity that surely cannot be duplicated by those who have never experienced such poverty, such disillusionment. It presents a world that is worlds apart from mine.

I find that a lot of Christian novels are really not a whole lot different from other novels, just that relationships are consummated not by sex but by a Christian conversion. Many novels read like any other novel but with a thin veneer of religion forced into it. Squat does not read like this but is, in many ways, a statement about people who are driven to live on the streets, the conditions that put them there, and the conditions that keep them there. Field presents both people who are there by circumstances outside their control and people who are there by consequence of their own poor decisions. There is much for Christians to think about.

Fields crafts interesting characters and characters you’ll find that you care about. While the characters are a far cry from ones I’d be likely to bump into in my life circumstances, they are intriguing and interesting. Squat was an enjoyable read and one I’d be happy to recommend to others.