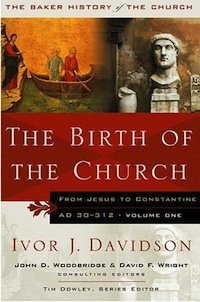 Buy from Amazon
The history of the church is so wide, so long, so vast, that it is intimidating to even begin a study of it. Yet the study of church history is exceedingly important, for only in understanding where the church has come from can we truly understand who we are and where we are going. In the past I have tried to read several series and one-volume histories of the church. Some have been wonderful and others have left a lot to be desired. Recently I decided to try reading The Baker History of the Church. The five-part series (four of which are currently available) begins with The Birth of the Church which covers the early history of the church, stretching from the death of Jesus to Constantine’s rise to power in AD 312–so roughly three hundreds years of history.

The first two volumes of this series, which is edited by Tim Dowley, are written by Ivor Davidson, senior lecturer in systematic theology at the University of Otago, New Zealand. According to a brief biography provided by Baker, he has written extensively on the history and theology of the early church. With my limited knowledge of early church history I feel somewhat inadequate to review such a book. I will have little to say about the accuracy of the information Davidson presents about the early church, as I will have to leave that for more educated historians than myself. What I will do, though, is direct the reader of this review to some of the strengths and weaknesses that present themselves within the book.

Strengths: I found the book quite easy to read and greatly informative. This is a book that is suitable as a textbook for college-level courses, and it is my understanding that many colleges and seminaries have adopted it as their text. It contains few illustrations or frills. It is, plain and simply, history. It did bog down a fair bit in some of the middle chapters, where the author discussed particular points of theology relating to some of the church fathers. I had to force myself through several of those chapters, but was richly rewarded in the final three chapters which discuss the worship and practice of the early church, its ministry and morals and its faith and politics. So while the book is at times a little bit uneven, it is clearly directed at the layperson rather than the scholar.

The early chapters were particularly gripping. Davidson tells the story of the book of Acts in the way we might find it written in a history text and I found this a compelling approach. It led me to a greater understanding of the history of the early church. An entire chapter is devoted to Paul, his travels, his impact and his theology.

Weaknesses: I was somewhat disappointed to see that the author probably lends a little too much credibility to the ongoing questions of New Testament authorship. A person who reads a good study Bible will quickly learn that almost every New Testament book has generated some level of controversy surrounding its authorship, but at this point there are only a couple where evangelical scholars have serious doubts about their authorship. Davidson seems willing to concede that the pastoral epistles may not have been written by Paul and that James may have been written by someone other than James. This was a little bit disappointing to me and may cause a reader to doubt the authenticity of some of the books of Scripture.

A further weakness was in the author’s understanding of the roles of women as defined by Scripture. The Bible provides women great freedom in their faith, but does restrict certain roles. Davidson would seem to doubt this and his belief is apparent that it was the early church that misread the Bible and caused women to be excluded from the leadership of the church.

In fact, it seems that perhaps the author is willing to concede a few too many points to political correctness and the spirit of our age. I was surprised to see him say, “Within a few years, the seeds would be sown that would develop into the shocking traditions of Christian anti-Semitism, in which the Jews would be blamed directly for the crucifixion of the Messiah and regarded as apostates upon whom God’s justice had justly fallen.” While anti-Semitism has existed within the church at various times and in various places, considering the Jews responsible for Jesus’ death and considering them apostate, is hardly anti-Semitic and is, in reality, little more than what the Scripture teaches. This affirmation, however, ought not to cause Christians to turn on Jews or to regard them differently, for we know that we are all responsible for Jesus’ death.

Conclusion: Despite these shortcomings, I did find this a valuable read and there is little doubt that I have a better understanding of the early church now than I did before I began this text. I intend to press on with the next volume of the series, which will lead me from AD 312 to AD 600.