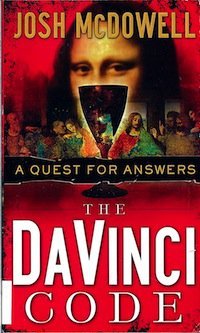 Buy from Amazon
The Da Vinci Code, having already sold some 40 million copies in book format, will soon be hitting the silver screen. Starring none other than Tom Hanks, the film promises to introduce the book’s claims to countless millions who have not already read the book. As we might expect, evangelicals are gearing up to defend the truth against many of the film’s spurious claims. It seems that every Christian publisher has released at least one or two books dealing with The Da Vinci Code suggesting how we, as Christians, can defend Scripture’s claims. I am convinced that, on the whole, this is a good thing.

Among those who have chosen to write about The Da Vinci Code is Josh McDowell, long respected as a prominent Christian apologist. His book The New Evidence That Demands a Verdict is regarded by many as a modern classic apologetic work. McDowell has done much to defend Christianity against those who seek to discredit it. The Da Vinci Code: A Quest For Answers takes an interesting approach. Rather than responding to The Da Vinci Code with a book similar to The New Evidence That Demands a Verdict, he chose to respond to the novel with a novel of his own.

While The Da Vinci Code: A Quest For Answers will not be nominated for a Pulitzer prize, it is quite well written and does more than a adequate job of covering the topic. McDowell tells the story of three friends who, having seen the film, decide to seperate truth from error, fact from fiction. They ask, “Was Mary Magdalene really Jesus’ wife and the mother of his child?; Did the church suppress the truth and fabricate Jesus’ claim to divinity?; Is the Bible as we have it really accurate and authentic?; Did Jesus really come back from the dead?. The reader will follow the three young people as they sip coffee and look into the past. They will find, as will anyone who cares to do the research, that Dan Brown’s claims are ridiculous. They will find that his book, which he attempts to disguise as fact, is merely fictitious nonsense. Though Brown claims that “all descriptions of artwork, architecture, documents, and secret rituals in this novel are accurate,” McDowell will quickly show that this is far from the truth.

The book closes with McDowell’s trademark “liar, lunatic, or Lord” challenge and concludes with a short presentation of the gospel message. He encourages the reader to “turn from self and to turn to God.”

The Da Vinci Code: A Quest For Answers is not available through retail outlets, but exclusively (I believe) through Beyond Belief. It has been discounted to only a couple of dollars per copy when purchased in bulk. If your church is hoping to prepare and equip its members for The Da Vinci Code, this may be a worthwhile, cost effective solution. While McDowell’s choice of genre assures that this book will not prove satisfying to every reader, it effectively deals with the claims of Dan Brown and the counterclaims of Scripture. Having said that, it is likely that, three weeks after the movie is released, these books will be available for a fraction of that cost and, Lord willing, we will never have to hear the words “Da Vinci Code” again.