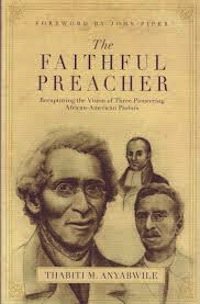 Buy from Amazon Buy from WTS Bookstore
The Faithful Preacher is a book full of surprises and in the Foreword John Piper says this book serves as a blow against chronological snobbery and ethnocentricity. I would tend to agree. Despite having read a fair amount of church history and many biographies I had no idea that there were many “black puritans.” I had no idea that in the 18th century a black man could marry a white woman and pastor an all-white congregation for over three decades. I had no idea that the eminent theologian Charles Hodge had taught African Americans and prepared them for a life of ministry in Presbyterian and other Reformed churches. I suppose I had little idea that the early history of the Reformed church in the United States had many significant African American leaders. This book has tackled my ethnocentric view of this period of church history.

To do this, [the blogosphere’s own] Thabiti Anyabwile has turned to three prominent African American preachers of days past. He says “those who have gone before us, old friends with old ideas, have left us a proven track record of faithfulness and fruitfulness.” The old friends he turns to are Lemuel Haynes, Daniel Payne and Francis Grimké.

For each of the book’s three subjects, Anyabwile provides a brief biography, a reflection on some of the accomplishments of their lives, and a selection of some of their most important sermons. The biographies are somewhat reminiscent of what John Piper has done with his The Swans are Not Silent series, moving beyond mere biography and looking instead to meaning and church-wide impact. His first subject, Lemuel Haynes, who lived from 1753 to 1833. Anyabwile focuses on Haynes’ emphasis on viewing the pastoral ministry from the vantage point of eternity and the accounting that pastors will give to the Lord. For Payne (1811 to 1893) he shows how Payne instructs us on how importance of preparation and education, both in intellect and character, affect both the minister and his flock. And for Grimké (1850-1937), he describes the challenge this minister has left us to remember that the church and pastor, as they confront the world and the world’s problems, is first and foremost to teach and to live out the gospel.

In the lives and ministry of these men you will see men who model what it means to be faithful preachers. Anyabwile chose them principally because of “their consistently high and biblical view of the pastoral ministry. They greatly esteemed the privilege and responsibility of caring for God’s people, of cultivating and leading a ‘pure’ church, and of dedicating one’s self to representing Christ before a dying world. They were puritans. They committed themselves to sound theology in the pulpit, theologically informed practice in the church, and theologically reformed living in the world. They saw Christ in all things and endeavored to see Him glorified before all people.”

I thoroughly enjoyed reading The Faithful Preacher and am glad to recommend it. It is an interesting read and one that focuses some long-overdue attention on men who were faithful preachers and who have much to teach the church even today (and perhaps it would be better to say especially today).