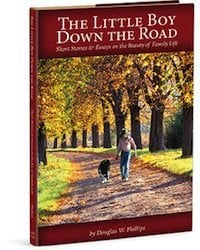 I don’t often post reviews two days in a row, but today you’ll need to bear with me.

I was somewhat surprised but rather pleased to find The Little Boy Down the Road in my mailbox one morning. It was the first I had heard of the book. I was drawn to it by its pastoral cover and its simple premise–“Short Stories and Essays on the Beauty of Family Life.” As the subtitle says, this is a collection of stories and essays that attempt to reveal the beauty of family life. It is, perhaps surprisingly, the first of Douglas Phillips’ books that I’ve read. Let me share a brief overview of its chapters.

“The Little Boy Down the Road” shares a son’s joy in the return of his father and goes on to speak of the simple joys of parenthood. “The Woman Who Chose Life” is a remarkable story of God’s providence in the gift of life while “The Art of Home School Opera” is a humorous look at the joys and importance of family eccentricities. I should note that in these early chapters I began to notice the repetition of certain words and phrases and felt like something was being said between the lines, that the author was building toward something, but was doing so using a lexicon that was unfamiliar to me. There was talk of homeschooling and patriarchy with many uses of the word multigenerational. But I digress.

Phillips is at his best when he is telling stories and allowing the stories to share the joys and beauties of family life. “The Animal Fair,” his chapter on the many animals that have been pets to his family is as humorous as it is poignant. He says rightly that “Pets tend to accumulate.” Once parents have opened the doors to one pet, others will inevitably follow. This has proven true in the Phillips family. “From rabbits to goats, tarantulas to chickens, dogs, horses, cats, fish, cows, crabs, birds, reptiles, vultures, and even baby deer–at some point or another, they have all lived with, beside, and even on top of the Phillips family.” Through the chapter he describes some of the best and some of the worst pets they’ve had, tells the awful truth about chickens, and pleads with the readers never, ever to trust a Llama (and especially so when it lowers its ears). And through the funny stories, he tells how pets have blessed his family, taught responsibility, and even forced the children to grapple with tough lessons on mortality. With its shades of James Herriot and Farley Mowat, this chapter is the book’s finest. You can download it and read it here.

“The Man’s Library” warms the heart of this avid reader and challenges me with the importance of not only building my own library, but beginning to build one for my son (and daughters) as well. “The League of Grateful Sons” shares what Phillips learned from filming a documentary with survivors of the battle of Iwo Jima and the children of some who did not survive.

As the book comes to its final chapters, it transitions from stories to essays and, sadly, becomes weaker. Here Phillips shows his hand, explaining more fully the emphases of his ministry. He espouses the importance of quiver full theology, of naming children with distinctive names (though here he is able to poke fun at himself for the unusual names he and his wife have chosen for their children), of multigenerational thinking, and so on. What were small hints in the book’s opening pages are unleashed more fully in its final chapters. This is not to say that any or all of what Phillips says here is wrong (though much of it is contentious and falls into the realm of disputable matters) but rather that the quality of writing is better when Phillips is telling stories rather than writing these essays. The book begins with a bang but ends with a bit of a fizzle.

There is a lot to learn from this man who has dedicated his career to emphasizing the importance of family but, more importantly, has dedicated his life to serving and leading the family God has given him. Your enjoyment of this book may well depend on just how much you enjoy the emphases of his ministry. Though I enjoyed reading the book (despite being convicted that my children are where they ought to be in public school, despite having only three kids, and despite never having used the word “multigenerational”), I couldn’t help but feel that the book would have been better had it been just about half as long or had the book’s second half been written in the style of the first.