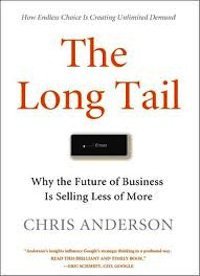 “The Long Tail” is one of those buzz-phrases I have heard time and time again in the past couple of years. In my ongoing pursuits to catch up with books that have been sitting on the New York Times list of bestsellers and to better under the culture we live in, I decided to read the book that seems to do the best and most thorough job of explaining this phenomenon. Written by Chris Anderson, editor in chief of Wired magazine, The Long Tail seeks to show “why the future of business is selling less of more.” While Anderson did not coin the phrase, he is the man primarily responsible for popularizing it (and, I suppose, for turning it into a proper noun rather than simply a descriptive phrase).

Become a Patron
The Long Tail describes the business model prevalent in many Internet-based companies such as Amazon, eBay and Netflix. Where most brick and mortar companies have, my necessity, had to focus on selling only the few products that are bestsellers (the green portion of the graph), Internet-based retailers have been able to offer a staggering variety (the yellow portion). They have been able to sell low volume of an almost limitless number of products. The typical big box retailer, for example, stocks only a relatively small number of books and focuses on the books that will sell the greatest number. They seek to sell high volume of a small number of titles. Internet retailers, though, because they are not constrained by shelf space, can offer near-infinite selection. They are finding that the long tail is almost infinite and is steadily growing ever longer.

The Long Tail deals with the economics of abundance–“what happens when the bottlenecks that stand between supply and demand in our culture start to disappear and everything becomes available to everyone.” This has drastically shifted our buying patterns. “Our growing affluence has allowed us to shift from being bargain shoppers to buying branded (or even unbranded) commodities to becoming mini-connoisseurs, flexing our taste with a thousand little indulgences that set us apart from others. We now engage in a host of new consumer behaviors that are described with intentionally oxymoronic terms: “massclusivity,” “slivercasting,” “mass customization.” These all point to the phenomenon of the Long Tail.

The Long Tail, then, seeks to show how consumer behavior changes in a market of infinite choice–a market that is no longer constrained by the difficulties inherent in having supply limited by logistics. The supply now exists for whatever demand we, as picky and increasingly particular consumers, can dream up. We live in a culture that is focused more and more on niches and less and less of hits and bestsellers. We do not necessarily want to write the book that sells best overall, but the book that sells best in the small niche that is most important to us. There is infinite opportunity for any of us to impact a niche.

I read this book not only to understand this phenomenon, but to think about how it impacts Christians. And I did not have to look far to make many applications. The chief of these was thinking about the concept of “a market of infinite choice.” As we becoming increasingly interested in niches rather than worldwide phenomena, it seems that this may impact the church. Think, for example, about the variety of Bibles available to us. There is a Bible for any person and for any niche, whether that be people who hunt, who enjoy sports, who are African American or who are teenage boys. We do not just want a Bible, but we want one that appeals within the niche. The same is true of churches, where we are already seeing more but smaller churches that seek to appeal not to everyone but to a particular group. We do not have to look far to find evidence of The Long Tail within the church. Whether this is good, bad or indifferent largely remains to be seen. But it is something we really should be aware of since much of the beauty of the church is in its variety. While culture may tempt us to gravitate towards those who share our interests and passions, the Bible directs us to those who share our faith, no matter what happens to interest them.

The Long Tail really is an interesting book and one that is very relevant to this culture. It is not a typical book dealing with the subject of economics, but is written in a way that is easy to understand and absorb. It describes a phenomenon I think the church would do well to understand.