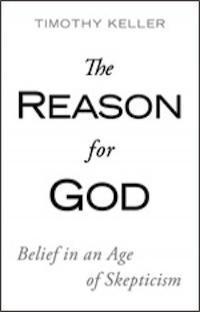 Buy from Amazon Buy from WTS Bookstore
There are many people I “know” primarily through their books. I read constantly and find that books allow me to understand the people who write them, especially when the author has written several books. As I read through the corpus of his writings I learn to understand how he thinks and learn to understand what he believes. Even if I have never met an author face-to-face, I often feel like I have met him in his books. Because Tim Keller has written so little, I do not know him in the way I feel I know many of his peers—pastors and theologians who have written extensively. So it was with great interest that I read The Reason for God, only his second book (besides edited volumes to which he has contributed a chapter) and certainly his most significant. Published by Penguin and with a positive review by Publishers Weekly, it has all the makings of a bestseller.

The Reason for God is written for skeptics and believers alike. It is a response to or perhaps an antidote to the the writings of popular authors like Christopher Hitchens, Richard Dawkins and Sam Harris. And it is a fine one, at that. While the skeptic has several volumes he can hand to a believing friend (many of them written by the aforementioned authors), the believer has fewer to choose from. So many introductions to Christian beliefs were written many years ago and simply do not resonate with today’s skeptics. They assume too much and deliver too little. Keller’s volume seeks to fill that void, and it does so well.

The Reason for God arrives at a unique time, for we are at a point when both belief and skepticism are on the rise. “Skepticism, fear, and anger toward traditional religion are growing in power and influence,” says Keller. “But, at the same time, robust, orthodox belief in the traditional faiths is growing as well.” As each grows, those who hold to each become increasingly convinced that they are in imminent danger. The world is polarizing over religion—or at the very least our culture is polarizing over religion. “We have come to a cultural moment in which both skeptics and believers feel their existence is threatened because both secular skepticism and religious faith are on the rise in significant, powerful ways. We have neither the western Christendom of the past nor the secular, religionless society that was predicted for the future. We have something else entirely.”

Attempting to find a way forward, Keller suggests that both believers and skeptics look at doubt in a whole new way. Within the book he does not make the classical distinction between believers and unbelievers, but rather between believers and skeptics. His thesis depends on this distinction between unbeliever and skeptic because, he says, we all believe something. Even skeptics have a kind of faith hidden within their reasoning. Understanding what we believe about belief is crucial. His thesis is this: “If you come to recognize the beliefs on which your doubts about Christianity are based, and if you seek as much proof for those beliefs as you seek from Christians for theirs—you will discover that your doubts are not so solid as they first appeared.” He seeks to prove that thesis in the book’s first part.

In the first seven chapters Keller looks at seven of the most common objections and doubts about Christianity and discerns the alternate beliefs underlying each of them. This section is titled “The Leap of Doubt” and answers these seven common critiques:

In the second half of the book, titled “The Reasons for Faith,” he turns to an examination of seven reasons to believe in the claims of the Christian faith.

The book begins with an Introduction, between the two parts is an Intermission, and following it all is an Epilogue.

The Reason for God is, at least to my knowledge, unique. The reader will soon see that Keller follows closely behind C.S. Lewis whom, along with his wife and Jonathan Edwards, he counts as his primary theological influences. Yet he sets Lewis and Edwards in a new context. And really, much of the book only makes sense within our contemporary cultural context. The arguments that matter here and now are different from those of days past and, I’m sure, different than ones in days to come. But the arguments Keller makes are compelling and reasonable and targeted pointedly at today’s skeptics. If you have read our day’s leading skeptics you owe it to yourself to read this as well.

Nobody but Tim Keller could have written this book. It seems likely to me that nobody but Tim Keller will agree with everything he says. For example, many believers will be uncomfortable with his defense of evolution—not the naturalistic evolution of so many skeptics, but a theistic evolution that attempts to reconcile rather than ignore the creation accounts of the Bible. Others will take issue with his description of hell and the thread of ecumenism that runs throughout the volume. But if we heed his exhortation to major on the majors, to look to what’s most foundational to the faith before focusing on matters of secondary importance, both believers and skeptics have a great deal to learn from this book.

Publishers Weekly has said well that this is a book for “skeptics and the believers who love them.” Believers will rejoice in a book that carefully and patiently answers the objections of their skeptical friends and does so with grace and in a way consistent with the Bible. Skeptics will see that even their skepticism is founded on some kind of faith and will be challenged to discern those underlying beliefs. May this book convince us all that we can believe and can believe reasonably, even in this age of skepticism.