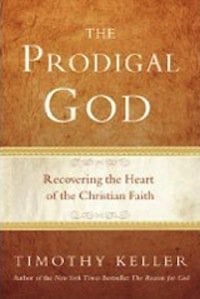 Buy from Amazon Buy from WTS Bookstore
After the publication of The Reason for God, Newsweek hailed Tim Keller as “a C.S. Lewis for the twenty-first century.” That is a lofty comparison and one I’m sure must make Keller quite uncomfortable. Yet at some level the comparisons are becoming undeniable. Keller’s ability to communicate to believers and unbelievers alike and to do so on an intellectual level clearly parallels that of Lewis. Where Keller’s first book offered an explanation as to why we should believe in God, his second, The Prodigal God, focuses on Jesus’ best-known parable (and arguably the best-known and most-loved story of all-time) to challenge both believers and skeptics.

In this book Keller makes no claim to originality. He states forthrightly that the message he conveys here is based on a sermon first preached by Dr. Edmund Clowney. That simple sermon, a fresh take on the parable of the Prodigal Son, changed Keller’s life and in many ways shaped his ministry. Over the years he has often taught from this parable, both at his church and elsewhere, and he has seen God’s hand of blessing in this message. And here he offers it in the form of a short book.

Traditionally, readings of the parable of the Prodigal Son have focused on the younger son and his reconciliation with his father. We learn from such readings that God is willing to receive all those who wander from him. Yet too often we overlook that third character–the older brother. Were the story only about the father and the younger son we would expect that the Pharisees, among those who first heard Jesus tell this parable, would react with joy. Yet we know from Scripture that they walked away in disgust and disbelief. Why? Because the parable pointed to them as examples of the older son. As Keller says, Jesus’ purpose in this parable “was not to warm our hearts, but to shatter our categories.”

He begins by ensuring the reader has a sense of Jesus’ original audience as he taught this parable. There were two groups near Jesus at the time. The first was tax collectors and sinners while the second was composed of Pharisees and teachers of the law. The tax collectors and sinners correspond to the younger brother–people who left the traditional morality of their families and social groups and engaged in what others would consider wild living. The religious leaders, on the other hand, correspond to the older brother, representing the moral and obedient who have never turned from the traditions of their culture and religion. Where the first group seek God through some kind of self-discovery, the second group seeks him through a type of moral conformity. Jesus’ message is that both of these approaches are wrong and in this parable he offers his radical alternative. “There are two ways to be your own Savior and Lord,” says Keller. “One is by breaking all the moral laws and setting your own course, and one is by keeping all the moral laws and being very, very good.”

While Keller focuses attention on both of the brothers, he gives more time to the elder brother. He wants the reader to know that a self-imposed standard of morality is not the same as truly knowing and following Christ. He wants those who are outwardly religious to search their hearts to see if there is an inner faith that goes along with the outward conformity. He challenges Christians with the fact that churches tend to be havens for the older brother kind of believer. “Jesus’ teaching consistently attracted the irreligious while offending the Bible-believing, religious people of his day. However, in the main our churches today do not have this effect. The kind of outsiders Jesus attracted are not attracted to contemporary churches, even our most avant-garde ones. We tend to draw conservative, buttoned-down, moralistic people. The licentious and liberated or the broken and marginal avoid church. That can only mean one thing. If the preaching of our ministers and the practice of our parishioners doesn’t have the same effect on people that Jesus had, then we must not be declaring the same message that Jesus did. If our churches aren’t appealing to younger brothers, they must be more full of elder brothers than we’d like to think.”

It is rare that a book effectively spans an audience of both believers and skeptics, but Keller bridges that gap. For skeptics this is a presentation of the gospel message of human sin and God’s extravagant grace; for believers it is a recounting of a story that never grows old. For skeptics it is an encouragement to be like the younger son by turning to the loving father who welcomes all who come to him; for believers it is a means of examining hearts to see if we have become like the older brother, so secure in our position that we take the Father’s love for granted and even resent it when that love is extended to those whom we feel are less deserving of it.

Though it is unlikely that The Prodigal God will achieve the same level of numerical success as The Reason for God, it remains an exceptionally useful and valuable contribution. While the book’s audience is broad, it may well prove most beneficial to Christians. It will set the gospel before them in a fresh way, forcing them to do some difficult but necessary heart work.

Parenthetically, The Prodigal God is this year’s second major book dealing with the parable of the Prodigal Son. John MacArthur also wrote about it in A Tale of Two Sons. In both cases, these authors focus fresh attention on the older brother; in both cases they accurately convey the sense of the text. While The Prodigal God is an excellent book, I think I almost preferred MacArthur’s take through his slow, steady exposition of the text. But honestly, both books are well worth reading.

Monergismbooks.com is offering a special on this book. If you purchase through Monergismbooks, you can apply a coupon code and receive 10% off your entire order. After you places the final item in “Your Shopping Cart”. Scroll below the shopping cart type the text prodigal in the “Coupon or Promotional Code” box. Click “APPLY.” You will need to have a customer account before this will work. Click here to take advantage of this deal.