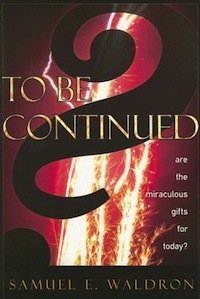 Buy from Amazon
There are few subjects more debated and more hotly debated in the church today than whether or not the miraculous gifts of the Holy Spirit continue to this day. We have recently seen a great deal of discussion about this issue in the blogosphere. It is an issue which leaves many believers confused, unsure as to what they believe and what they should believe. Cessationists, who believe that the miraculous gifts have ceased, often point to the excesses of the charismatic movement as proof that God surely could not stand behind such manifestations of His Spirit. Many continuationists, who believe the gifts continue to be poured out on the church, suggest that it is unfair to rely on the extremes of the movement and point instead to the more biblical, moderate charismatics, among whom are often cited Sam Storms, John Piper, Wayne Grudem and C.J. Mahaney.

In an attempt to bring clarity to this issue I recently conducted interviews with Dr. Wayne Grudem and Dr. Sam Waldron. Dr. Waldron discussed a defense of cessationism he outlined in his new book To Be Continued.

Dr. Waldron’s argument is simple. If it can be proven that the gift of Apostle is no longer operative in the church today, and this is something that even many continuationists believe, that provides the opportunity to discuss the possibility that other gifts have also ceased. And so he argues from the greater to the lesser. If the gift of Apostle has ceased, so too can it be proven that the other miraculous gifts have ceased – gifts that include speaking in tongues, miracle working and prophecy. His argument naturally cascades from one point to the next.

This is how Dr. Waldron summarized the argument of his book during the interview I conducted with him:

That we must begin as cessationists with what is most clear in Scripture and it is also admitted by many continuationists, and that is that there are no longer “big A” Apostles, or what I might call, strictly speaking, Apostles of Christ or the church. But what I argue is that that is a great or even fatal admission for continuationists to make, and it is also something that’s made plain in the Scriptures. If there are no Apostles of Christ that creates the precedent for saying that, at least in certain respects, the apostolic period and the church today are distinctly different because the absence of Apostles of Christ is a great difference between the apostolic period and today. The first gift, the most important gift, is now missing in the church. I think that exposes a fundamental flaw in continuationist argument and in the mockery of cessationism that you meet in some circles.

I found Dr. Waldron’s argument both compelling and forceful. It is infused with Scripture and whether a person agrees or disagrees with it, he will not be able to say that the author has not attempted to be faithful to Scripture. Finally, the book is generous. Dr. Waldron does not argue against worst-case scenarios and does not argue against some of the more bizarre and patently-unbiblical manifestations of the charismatic movement. Instead he seeks to answer the Grudems and Pipers – moderate charismatics who are known more for their love of and respect for Scripture than for believing in the continuing gifts.

It is telling that this book is endorsed by such notable cessationists as John MacArthur, Tom Nettles, and Al Mohler. This is clearly a book that cessationists feel puts forth a convincing argument.

To Be Continued is quite a short book and one does not require a degree in theology to read and understand it. It is adequately supported by Scripture and not merely theological but also deeply practical. I highly recommend it to anyone seeking to understand whether or not the miraculous gifts continue to be operative in the church today.