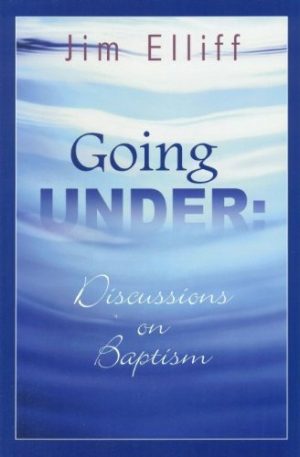 Buy from Amazon
As Baptists go, I consider myself quite charitable when it comes to beliefs on baptism. I suppose this is due to my Presbyterian background and my ongoing struggles with fully committing myself to either infant or believer’s baptism. I have studied the arguments made by both camps and see beauty and biblical support in both. Unfortunately, though, they cannot both be true which means that one must be wrong. I have aligned myself with the Baptist camp, a move that was initially as much out of necessity as conviction. I guess at this point I wish I felt conviction that paedo-baptism was biblical, but at this point it is not quite there.

Jim Elliff feels no such confusion. His small book Going Under presents five discussions on baptism. He gives biblical insight into five issues:

His answers to these questions reveal, as we would expect, his firm belief in the Baptist position. Drawing from Scripture and from the history of the church, he defends believer’s baptism, full immersion, the symbolism of baptism, the newness of baptism (as opposed to the refashioning of the Old Testament rite of circumcision) and the authority of the church in administering this ordinance. It is clear that he has sought to understand the various understandings of baptism and does not speak rashly or falsely of any. Having said that, I thought he was perhaps a tad simplistic in his explanations of paedo-baptism in a covenantalist context. Still, there is only so much ground that can be covered in sixty pages.

Going Under is a brief but biblical examination of baptism and is one worth distributing within Baptist churches, for it will serve to educate those who may be considering making their faith public in this way.