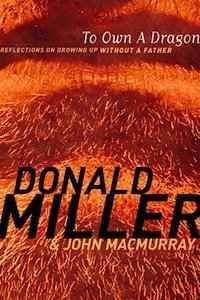 Donald Miller’s popularity continues to grow. His mostly autobiographical book Blue Like Jazz put him on the map as a notable author and his subsequent books and speaking opportunities have served to increase this popularity. He is particularly well-liked by teens and young adults. It is to a portion of this audience that To Own A Dragon is addressed.

Miller grew up without a father. He does not reveal exactly where his father went or why he left, but only that his was a single parent home throughout his youth. It was only as an adult that he came to realize just how profoundly this effected him and impacted his life. As he came to understand this, he felt it worthwhile to write a book reflecting upon growing up without a father. Miller, with his trademark honesty, self-deprecation and borderline crudeness, reveals the journey that brought him at last to a place of redemption.

The key to this journey was the role of John MacMurray, an apparently godly man who was willing to invest himself in Miller’s life. He invited Miller to move into his home, his family, his life so that he could provide the mentorship and guidance he so sorely lacked. Miller was, at this time, clearly desperately immature and self-centered. MacMurray was able to model to him manhood and maturity. He was able to help him wrestle with the demons of his past.

Some of what Miller reveals about a life of fatherlessness is heart-rending. “The Scripture that states, if an earthly father knows how to provide for his children, how much more God knows how to provide for His, speaks volumes in antithesis too: If an earthly father abandons his children and wrecks their lives, how much more would an abandonment from God destroy a human being?” This is something I have heard often in life. As more and more children grow up without a father, most often as the result of divorce, it becomes increasingly difficult for them to have confidence in a God who reveals himself as a Father. Just as they are unable to relate to an earthly father, so they find that they cannot relate to a heavenly Father. Miller reveals also that he often feels that God just isn’t too interested in him. “I think the occasional doubt that God is more interested in other things, other people, perhaps.” These are among the symptoms he attributes to fatherlessness.

Miller’s hope is that men who not had fathers in their lives, will be able to help and mentor others. He wonders if “God calls specific people who have specific pain into the authority of empathy. Experience is, after all, the best education.” He encourages such people to be “wounded healers,” those who can “wrestle with security, who will overcome our fear of intimacy, who will learn the hard task of saying with a woman and our children, who will mentor others through the difficult journey of life, perhaps rescuing them from what we have been rescued.” The book ends on a positive note, with Miller thankful for the healing that has come to his life and encouraging his readers to invest in the lives of others.

To Own A Dragon is a book that is easy to read and easy to understand, though not one that will appeal to everyone. If you are seeking a Scriptural framework for overcoming the pain of the past, this is probably not the best choice. But if you are able to find joy and comfort in the experiences of another as he wrestles with Scripture and is guided by a mentor, To Own A Dragon may prove valuable. I can’t say that I much enjoy Miller’s books as much as those by authors who more thoroughly ground their writings in Scripture, but I can say that I probably enjoyed this one more than Miller’s previous titles. It’s not that it’s a bad book; I’m just not convinced that it’s particularly good.