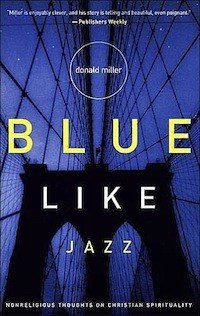 I can’t deny that was a little apprehensive about this book before I began it, even though I had not read any detailed reviews and had little idea of the content. Just a few days before I began reading I had seem an interview with the author, Donald Miller, in “The Door Magazine” in which he had been terribly sarcastic and quite crude (judging by the number of words that had to be “blanked” out). It left me with an impression of the author that was not altogether favorable.

Despite my misgivings, I found that I enjoyed this book more than I thought I might. That is not to say it is without its problems, and without some serious problems at that. But I enjoyed the rambling, conversational tone of the book, even if it is a little difficult to follow at times. In fact, there are times where it is downright irritating as the author launches into tirades about Republicans or traditional Christianity. He subtly applauds Bill Clinton while denigrating George Bush. He sneers at traditional churches, but affirms his enjoyment of the Catholic Mass and the Greek Orthodox Church. And all the while he makes self-deprecating comments and expresses himself in words that are generally considered inappropriate for a Christian book (“kick in the butt,” “pissed-off,” “crap,” etc).

So what did I like about the book? Blue Like Jazz is built around a sound premise – that the Christian faith continues to be relevant even in a postmodern culture. Miller writes, “I don’t think any church has ever been relevant to culture, to the human struggle, unless it believed in Jesus and the power of His gospel” (page 111). I agree entirely that the church can only be relevant to the culture if it maintains the centrality of the gospel and remains unashamed of that simple message. Unfortunately that gospel message becomes somewhat blurred in this book. “[The central message of Christ] is that man sinned against God and God gave the world over to man, and that if somebody wanted to be rescued out of that, if somebody for instance finds it all very empty, that Christ will rescue them if they want…” (page 124). The Bible, however, teaches that no person wants to be rescued. God needs to begin a prior work in order to draw people to Himself. Miller, on the other hand, teaches that there is something within us that draws God to us. “I realized, after reading those Gospels, that Jesus didn’t just love me out of principle; He didn’t just love me because it was the right thing to do. Rather, there was something inside me that caused Him to love me” (page 238). When we acknowledge that there is something inside of us that draws God to us, we deny that it is His grace alone that saves us, for grace is, by definition, unmerited favor. There is nothing in us that makes us worthy of God. He loves us because of something inside of Himself, not inside of us.

I also enjoyed other aspects of the book. The reverse confession booth makes for great reading, as do many of Miller’s other stories. Despite some poor theology, he gave me a lot to think about, especially in regards to taking theology beyond the doors of the church and really turning it into practice.

I believe, though, that the great failing of this book is the author’s belief that Christianity is a feeling, and is not something that can be rationally explained or understood. Early in the book, on page 54, Miller writes that God does not make any sense. Just a few pages later he writes that Christian Spirituality is something that cannot be explained, but is something that can only be felt. “It cannot be explained, and yet it is beautiful and true. It is something you feel, and it comes from the soul” (page 57). Later he writes, “At the end of the day, when I am lying in bed and I know the chances of any of our theology being exactly right are a million to one, I need to know that God has things figured out, that if my math is wrong we are still going to be okay. And wonder is that feeling we get when we let go of our silly answers, our mapped out rules that we want God to follow. I don’t think there is any better worship than wonder” (page 206).

This irrational, feelings-based approach to Christianity is consistent with postmodern thought, where experience rather than an objective standard is the arbiter of truth. Miller rarely returns to the Scripture, and instead opts to explain his beliefs through the lens of his own experience. He seems to trust in experience instead of having a rational faith in a rational God who is truly sovereign. In fact, I do not recall any specific references from the Scripture – an oddity considering that the book claims to be thoughts on Christian Spirituality. But perhaps “nonreligious” thoughts preclude the use of Scripture proof-texting.

It is strange, that having come to the end of this review I am far less enthusiastic about the book than I was in reading it and in reflecting on it afterwards. While I can say that I did receive some benefit from reading it, I would be hesitant to recommend it to others. There is some value to be found, but one has to dig deep beneath layers of rambling untruth and poor theology to find them. There are many other books that contain far more treasure than this.