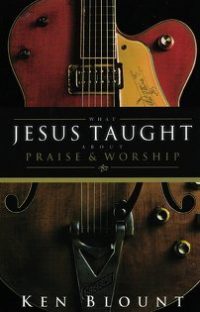 What Jesus Taught About Praise And Worship sounds like a fascinating title for a book. Never having heard of Ken Blount I was unsure as to what he was all about, but expected some interesting insights from someone who seems to have for several decades run a successful worship ministry. Alas, I was wrong.
This book is a confused mess of poor theology, bad hermeneutics and some pretty awful teaching. The few useful teachings are more than overwhelmed by the bad. The book gets off to a suspicious beginning as the author recounts an experience where the Lord supposedly gave him a prophetic song in a situation he describes as his “most powerful encounter with God’s manifest presence.” A few pages later he describes his wife’s conversion experience where she was not content just to give her life to the Lord but also insisted that she speak in tongues as well. He attributes his later conversion to his wife’s “sneaky Christianity” where she would lay hands on him and pray over him in tongues while he was sleeping. Later on he teaches that worshipping God in spirit (John 4:24) means “to pray in the Spirit in other tongues.” Doing this will active your “spirit man.” In another place he says that Jesus had the “gift of the Spirit called the word of knowledge” which enabled him to get people’s attention (specifically the woman at the well in John 4).

A large portion of the book is dedicated to an explanation of the Old Testament tabernacle and how it was a shadow of New Testament worship. His explanation is faulty and borders on the bizarre in many places.

For sake of brevity I will leave it at that.

The book is not all bad. The author does make some interesting and valid points. For example, he discusses the importance of worship in the dry times of life and the importance of being on guard for unbiblical manifestations of the Spirit. But in the end, the bad so far outweighs the good that I cannot recommend this book.