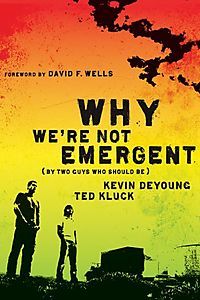 Buy from Amazon Buy from WTS Bookstore
“What is this emerging church I keep hearing about?” If I had a dime for every time I have been asked that question or one like it, well, I’d be several dollars richer at least. Emerging is one of the buzzwords in the church these days and one that begs for greater explanation. Unfortunately it is not an easy term to define. To borrow a tired cliche, defining the emerging church is much like trying to nail Jello to the wall. It’s a near-impossible task, but one Kevin DeYoung and Ted Kluck attempt with great success in their new book Why We’re Not Emergent (By Two Guys Who Should Be). These are two young men who, if we were to look to demographics, would be top candidates for involvement in the emerging movement. Yet they’ve turned away from it, opting instead to commit to ministry and service within more traditional churches. In this book they explain why and in so doing explain what the emerging church is about and warn of the danger it poses.

In an editorial decision that turns out to be quite successful, DeYoung and Kluck alternate chapters throughout the book (though you’ll want to watch for an exception at the very end where Kluck writes two consecutively). DeYoung’s chapters are the more academic ones—they provide some in-depth interaction with the theology of the emerging church. Kluck’s chapters, on the other hand, are less formal and more reflective. They actually read, perhaps ironically, not unlike something Don Millar might have written.

Kluck typically begins his chapters by discussing a book he has been reading or an emergent speaker he has heard. He bridges to some of the shortcomings of the emergent movement and some of the ways it has proven unbiblical. He includes several poignant and profound descriptions of his church and the kind of classical Christianity that has fallen out of favor among emergents. Speaking of his search for a church he writes, “I was looking for a theology and a body that I could give my life to and entrust with my children. The reason I love Christianity and the Bible is that I think they are really the only things in this world that don’t need to be periodically ‘repainted’ or reframed.” Quoting a friend, Kluck writes, “My other main concern is [emergents] seem to have adopted the American demographic marketing model. I may be wrong, but I’m afraid that a movement that claims to care about justice, community, and inclusivity seems to just be tailor-made for white, suburban, affluent professionals in their twenties and thirties. That concerns me from a self-delusional standpoint.”

Meanwhile, DeYoung’s chapters are the real heart of the book. He covers a variety of topics of great theological importance including the Bible, Christian doctrine, the impact of modernism on theology, and the doctrines of Jesus Christ. He shows the danger inherent in the emergent unwillingness to take stands even on doctrines closest to the heart of the Christian faith. The claim that emerging theology is still in process is no excuse. “It’s one thing for a high school student to be in process with his theology. It’s another thing for adults to write books and speak around the world about their musing and misgivings. I agree there must be space for Christians to ask hard questions and explore the tensions of our faith, but I seriously question that this space should be hugely public where hundreds of thousands of men and women are eagerly awaiting the next book or blog or podcast arising from your faith journey. No matter what new label you put on it, once you start selling thousands of books, speaking all over the country and world, and being looked to for spiritual and ecclesiastical direction, you’re no longer just a conversation partner. You are a leader and a teacher. And this is serious business…” Neither can emerging leaders simply claim that they should not all be lumped together. “Call it a friendship, or a network, or a web of relationships, but when people endorse one another’s book and speak at the same conferences and write on the same blogs, there is something of a discernible movement afoot.”

Ultimately the authors conclude, as have many Christians, that “Emergent Christians need to catch Jesus’ broader vision for the church—His vision for a church that is intolerant of error, maintains moral boundaries, promotes doctrinal integrity, stands strong in times of trial, remains vibrant in times of prosperity, believes in certain judgment and certain reward, even as it engages the culture, reaches out, loves, and serves. We need a church that reflects the Master’s vision—one that is deeply theological, deeply ethical, deeply compassionate, and deeply doxological.” We serve a God who is knowable and who wants to be known. We do not need to establish doubt as the essence of faith, but can have confidence in what God teaches about Himself. We need to be Christians who are first deeply theological and who allow ethics and justice and compassion to grow outward from that theological base. This has been the great failing of much of the emergent church.

Why We’re Not Emergent is not a scholarly treatment of what is largely a popular-level movement. Instead this is an eminently accessible book and one that should have very wide appeal. It will introduce you to the key leaders and foundational books of the emerging movement. It will show you why this emergent movement is so deceptive and so dangerous. If have been searching for a book that will help you to understand the emerging church or if you have been seeking to answer a friend’s question “What is the emerging church?,” this is just the book you’ll want. I heartily recommend it.