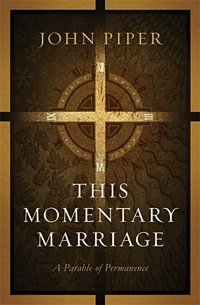 John Piper waited forty years to write a book on marriage. It is only after forty years of marriage that he felt like he would have something valuable to say (or something valuable to add to a very crowded genre of book). “Romance, sex, and childbearing are temporary gifts of God. They are not part of the next life. And they are not guaranteed even for this life. They are one possible path through the narrow way to Paradise. Marriage passes through breathtaking heights and through swamps with choking vapors. It makes many things sweeter, and with it come bitter providences.” Four decades of sweetness and bitter providences stand behind this book.

Though I am tempted to say that no generation needs to be reminded of a biblical theology of marriage more than our own, I suspect that hundreds of generations past would disagree, saying that their generation is as desperately in need of God’s wisdom. In the book’s opening pages, Piper writes of the cultural distortion of marriage, a distortion that sees marriage as little more than temporary convenience that lasts only as long as the romantic feelings remain. He does so “in the hopes that it might wake you up to consider a vision of marriage higher and deeper and stronger and more glorious than anything this culture–or perhaps you yourself–ever imagined. The greatness and glory of marriage is beyond our ability to think or feel without divine revelation and without the illumining and awakening work of the Holy Spirit.” The book is built upon this foundation: that marriage is God’s doing. It is the doing of God and it is the display of God.

“The aim of this book is to enlarge your vision of what marriage is. As Bonhoeffer says, it is more than your love for each other. Vastly more. Its meaning is infinitely great. I say that with care. The meaning of marriage is the display of the covenant-keeping love between Christ and his people.” Marriage, then, is a parable, a gracious, glorious parable given by God, that tells of the permanence of Christ’s commitment to his people.

The point Piper makes time and time again is this: “Marriage is patterned after Christ’s covenant relationship to his redeemed people, the church. And therefore, the highest meaning and the most ultimate purpose of marriage is to put the covenant relationship of Christ and his church on display. That is why marriage exists. If you are married, that is why you are married. If you hope to be, that should be your dream.” Thus staying married is not about staying in love but about keeping covenant; getting divorced involves not just breaking a covenant with a spouse but misrepresenting Christ and his covenant. His understand depends, obviously, on a reading of Ephesians 5:32 that sees marriage primarily as a metaphor for Christ and the church. There are some biblical interpreters who would seem to disagree; if I read them properly it seems that many, perhaps mostly of the Presbyterian tradition, would reverse the two, saying that the relationship of Christ and his church helps us understand marriage rather than the other way around. Though I am not entirely convinced one way or the other, I do think Piper makes a sound argument. Even without standing one hundred percent behind it, I found great value in the book.

With Ephesians 5:32 as his starting place, Piper looks at a whole list of topics related to marriage: nakedness without shame; love and romance; forgiveness and forbearing; conformity to Christ; headship and submission; singleness; sex; procreation; evangelism; and divorce.

There were only a couple of areas in which I found myself disagreeing with Piper. The first was in his view of remarriage after divorce. His understanding of Scripture does not allow remarriage under any circumstances. Hence a woman whose husband leaves her and marries another, has no biblical defense in her desire to remarry. Though Piper admits that this is a minority view among Christians, his conscience binds him to it. I tend to disagree with this view and believe that the innocent party may remarry. Yet I understand how Piper arrives at his view and can see how it is consistent with the rest of his views. The second area of disagreement (or perhaps potential disagreement) was in his view of procreation within marriage. Again, because of his starting point at Ephesians 5, he has to raise the importance of spiritual children over natural children, saying that the absolute commands of Scripture pertain to evangelism and not to procreation. In most cases both will happen, but Piper does allow for marriages that deliberately exclude children; I am not so sure we can build a strong biblical argument for this.

But even in these chapters, as with all the rest, I learned a great deal. Particularly strong are the chapters dealing with headship (where he writes of the humbling nature of biblical headship) and the chapter dealing with the gift of sex in marriage. Also excellent was the rather unexpected (but necessary) chapter on singleness. Rare is the book on marriage that writes also of singleness and God’s plan for those who do not marry.

Perhaps the emphasis I most enjoyed is this: that marriage is not about lifelong fireworks and unending doe-eyed feelings of romance. Instead, marriage is about the long-term commitment to make a statement about God to the rest of the world. In the opening chapter Piper writes, “Marriage is a momentary gift. … As this book is published, Noel and I are passing our fortieth anniversary of marriage. She is God’s gift to me–far better than I deserve. We speak often of the wonder of being married tell one of us dies. It has not been trouble-free. So we imagine ourselves in our seventies or eighties–when divorce is not only sin, but socially silly–sitting across from each other, perhaps at Old Country Buffet, and smiling at each other’s wrinkled faces, and saying with the deepest gratitude for God’s grace: ‘We made it.'” This is a realistic book, one that is written from a gritty, true-life perspective. It is a powerful book that turns constantly to the Bible, to the Creator of marriage, to gain his perspective. It is not practical in the sense of offering six easy steps to a healthy marriage, but practical in the sense that it offers a biblical foundation that can support and sustain a healthy, God-honoring marriage. Piper waited forty years to write this book and those long years are reflected from the first page to the last. 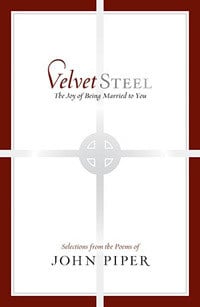 The poems are arranged chronologically, perhaps not in the order they were written, but in the order of their application to marriage. So the first poems speak of a wedding and the final ones speak of death. Most of the poems are short, just a page or two in length. Many are excerpts of longer works.

Though I do not read poetry as often as I ought and though I am not very skilled at reading and understanding it, I greatly enjoyed this little volume. I read through it on my own and then returned to some of the selections later with my wife. Piper is a gifted poet and in this little book he communicates not only what he could not communicate because of the theme of the first book, but also because of the genre. There are some things that only poetry can communicate; great affections often turn from prose to poetry and for good reason. Here Piper shares his affections in a wonderful collection of little poems. It is a perfect companion to This Momentary Marriage.

While the books could be read and enjoyed independently of one another, I would suggest the full experience will require both. You can buy them both at Monergism Books: