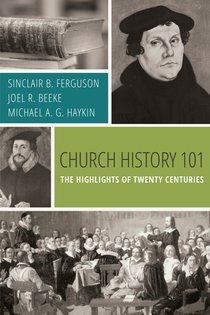 I love church history and believe deeply in its importance. Far too often have I seen the consequences when Christians–individuals, churches, movements–become unhinged from the history of the church, unmoored from the life and work of those who have gone before us. Yet church history is so expansive, so daunting, and often so badly told that sometimes it seems easier to ignore it altogether. For that reason I am thankful to see Church History 101, a short work somewhere between a book and booklet that represents the combined efforts of Sinclair Ferguson, Joel Beeke, and Michael Haykin.

Church History 101 began with Sinclair Ferguson during his pulpit ministry–he prepared the material as an introduction to church history meant for his own congregation. That material was later revised by Joel Beeke and Michael Haykin as they prepared The Reformation Heritage KJV Study Bible where the same material is printed. And now it is also available as this short, readable book.

In the introduction the authors offer five reasons to study church history: 1) It continues to record the history of God’s faithful dealings with his people and it records Christ’s ongoing work in the world. 2) We are told by God to remember what he has done and to make it known to those who follow us. 3) Church history “helps to illuminate and clarify what we believe” and in that way allows us to evaluate our beliefs and practices against historic teaching. 4) It safeguards against error by showing us how Christians have already responded to false teaching. 5) And finally it gives us heroes and mentors to imitate as we live the Christian life. In this way it promotes spiritual growth and maturation.

With these benefits. With that in mind they move into what is a quick and brief overview of Christian history. The format is very simple: Each century from the first to the twentieth receives its own chapter and they are all just about 5 pages long. Each of the chapters introduces key characters and movements though obviously only in a very brief way.

So, for example, the chapter on the thirteenth century sets the context of the Crusades and monasticism, then focuses attention on the key characters Francis of Assisi and Thomas Aquinas. “[Francis] gave himself to a life of simplicity and a great concern for preaching repentance as the way into the Kingdom of the Lord Jesus Christ. Though he imbibed many of the serious theological errors of Roman Catholicism, Francis sought to point the church back to a simplicity of lifestyle.” As for Aquinas, they discuss his two major works and conclude “As able as Thomas was in many respects and as sincere as many of the monks no doubt were, later reformers would come to see theological problems associated with Thomas’s Semi-Pelagianism and the practical problems of the Western religious orders.”

The chapter on the sixteen century, the century of Reformation, focuses almost entirely on Luther, gives a one-paragraph nod to Calvin, and simply lists the other Reformers. The chapter that follows tells of the Reformation in England and the one after that focuses on the Great Awakening.

All-in-all, I think this chapter-per-century format succeeds well. Obviously there is so much that cannot be said. Obviously even those things that are said are said with brevity. And yet the format works in providing a brief introduction to the dominant themes of each century of the long and storied history of Christ’s church. Church History 101 succeeds as something like an annotated timeline and as a teaser for further study. My hope is that people will read it and find that it whets their appetite for further, deeper study.