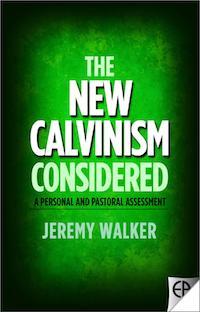 The New Calvinism is the subject of Jeremy Walker’s new book The New Calvinism Considered: A Personal and Pastoral Assessment. Behind that rather austere title is a very accessible book that does exactly what the title claims: it shines a spotlight on this theological movement and considers where it has come from, what it has accomplished and where it may be going in the future.

While the New Calvinism is primarily an American movement, Walker writes from the far side of the Atlantic where he pastors Maidenbower Baptist Church in Crawley, England. This gives him an interesting perspective and one that may be slightly more objective than if he was based in North America. I found myself eager to read his assessment and eager to hear his inevitable critiques.

The first chapter is titled “Comprehending the New Calvinism” and here Walker explains what he hopes to accomplish in his book. He explains that he writes from a personal and pastoral perspective, which means his understanding is necessarily subjective and limited. He seeks to provide a balanced and appropriately irenic appreciation which means that while he is not breathless in his praise, neither is he overly harsh in his criticism. Finally, he wants the reader to know that the New Calvinism is not monolithic and, therefore, he cannot speak to every corner and nuance of the movement.

With those caveats in place, he advances to chapter two, “Characteristics of the New Calvinism.” Here he provides a brief primer of the Calvinistic theology that lies at the heart of it and introduces some of the cast of characters—the pastors, theologians and other leaders. He also writes about some of the conferences and associations that make this thing a movement, and closes by suggesting that as a movement the New Calvinism is already beginning to broaden and slow.

Chapter 3 contains his commendations of the movement. He praises the New Calvinism for being Christ-oriented and God-honoring; for being grace-soaked; for its emphasis on missional living; for its focus on complementarian theology; for being willing to take advantage of new opportunities and technologies; and for its deep commitment to expositional preaching. These commendations come across as sincere and not the least bit fake or forced.

With the commendations in place, he dedicates chapter 4 to a series of cautions and concerns. He warns of: the pragmatism and commercialism that may lie at the root of this movement; an unbalanced view of culture that allows people to Christianize what ought to be rejected outright; a troubling approach to holiness displayed in either antinomianism or unbiblical views of sanctification; a potentially dangerous ecumenism—a pursuit of unity that may eventually come only at the cost of truth and doctrinal minimalism; the unresolved tension surrounding the miraculous spiritual gifts (Note: this was written before John MacArthur’s Strange Fire conference and book!); and finally, a triumphalism, a brashness, that may come when a movement is young and seemingly successful. In the same way that Walker’s commendations come across as sincere, his criticisms come across as genuine and kind.

The final chapter is given to “Conclusions and Counsels.” Here he tosses aside knee-jerk reactions to both the commendations and cautions and urges people to continue to embrace the good but with a greater awareness for those concerns. He says, “[B]e Calvinists. Do not panic blindly. Do not capitulate foolishly. Do not strike wildly. Live before God and be determined to learn of Christ in dependence on the Holy Spirit. Love and serve the triune God above all, and be ready to love and serve his saints wherever you find them, and however your supreme attachment to the Lord of glory demands it.”

Overall, I found Walker’s assessment very compelling. If someone had asked me to sketch out my commendations and concerns of the New Calvinism, they would have matched his almost exactly. I would have liked to see a few more words dedicated to the women who have been involved in the movement and those who have been leaders within it. After all, while the New Calvinism is distinctly complementarian, there are women who have played important roles within it. I would have liked to have a little less hedging and qualifying in the section dedicated to commendations. And I would have liked a little more prescription. It is easy enough to identify issues, but far more difficult to propose a compelling alternative.

While I am thankful for this movement and while I am grateful to have been swept up in it, while I do love Reformed theology and while I thank God for all the good he has done, still I hold many of Walker’s concerns and believe they are well worth considering.

I believe a book like this is a sign of health for a movement; it is when a movement refuses to examine itself, to admit and respond to weaknesses, that it is destined to fail. A willingness to read and consider such critiques will be an even greater proof of health, and for that reason I commend this book to you. (It is currently just $6.79 at Amazon)