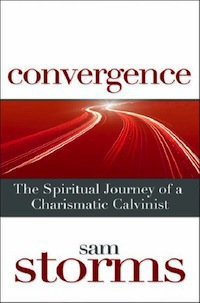 “There’s no escaping the fact that a serious, and occasionally vitriolic, breach exists between Word-based evangelical cessationists and their more experientially oriented charismatic cousins.” It is true, of course, that there is a breach between cessationists, those who believe that the more spectacular of the spiritual gifts (prophecy, tongues, etc) have ceased, and charismatics, who do not. In recent days we have seen the beginnings of the healing of that breach between those who hold similar beliefs on the most important doctrines of the faith. It was no small matter when John MacArthur, author of Charismatic Chaos, invited C.J. Mahaney to preach from his pulpit. Similarly, it was an important step when the heads of several major ministries announced the upcoming Together for the Gospel conference. Sam Storms, the President of Enjoying God Ministries, is a pastor and teacher who identifies himself as both a charismatic and a Calvinist. The recently released Convergence is his attempt to bring some closure to this breach.

The main premise of the book, as we might expect, is that on the whole Calvinists tend to have the theology but neglect the working of the Spirit. Conversely, charismatics have the heart or the deeds but tend to neglect theology. What Storms proposes is a convergence between these traditions where Christians can practice and affirm the biblically-based strengths of each of the traditions. On the whole he seeks to be fair to both traditions and to support his arguments with Scripture. I have a great deal of respect for the author and his ministry. I know that he is a godly man and a gifted teacher of the Word. But on the issue of the charismatics gifts, I think he is, quite simply, just plain wrong. I do not have time or inclination in this review to provide a thorough refutation of charismatic theology, so I will simply address the major points of the book from the cessationist perspective. Keep in mind that my views align closely with those of most Calvinists (and most notably with John MacArthur whose book Charismatic Chaos was foundational in forming my theology in this area).

Before we briefly examine this book, allow me to point out two things that this book is not. First, it is not an examination of Calvinism. While the author spends a small amount of time affirming his respect for and belief in the doctrines that have come to be known as Calvinism, the vast majority of the book discusses charismatic teachings. The book is clearly not an attempt to lead charismatics to the doctrines of grace, but is an attempt to lead Calvinists to accept charismatic teachings. Secondly, this book is also not primarily a biblical apologetic for charismatic teachings. There is some effort expended in providing biblical support to speaking in tongues or interaction with angels, but relatively little.

The book is divided into three parts. In the first, Storms provides a biography of about 100 pages wherein he describes his journey to the rejection of cessationism. In this section he provides many examples of the type of prophecy, tongues and other gifts that he now believes in. While I was prepared to hear about speaking in tongues and praying for miracles, I was surprised and perhaps even shocked by how far Storms delves into what I consider the bizarre. Allow me to provide a couple of examples.

At one point Storms describes a time that a prophetically gifted man came to the pastor of a Kansas City church and said, “God is going to speak to us through the baseball game.” The man went on to say, “The Lord said that He would speak to this church through the baseball game, and that for a time it would appear that Kansas City would lose, but suddenly they will win.” Storms says, “At least one thing was clear from this word: the experience of the Kansas City Royals major league baseball team was to be a prophetic parable for what would happen to the kingdom of God in Kansas City.” This prophecy was delivered in June when the Royals were struggling, but by the end of the season they pulled off some amazing, underdog wins that catapulted them to the World Series. Game seven of the World Series came around and this man received another prophetic word, this one saying that “The Lord will speak to us through the number 11 in the game tomorrow.” Lo and behold, the Royals won the game 11-0. Storms concludes, “I am still not sure how this will all work out in terms of the kingdom of God in Kansas City. Perhaps the fulfillment of this prophecy is yet to come. No one is quite sure how, but you can rest assured we’re watching.”

The author also provides several examples of God’s leading through what cessationists would consider mere coincidence, and certainly not the leading of the Holy Spirit. When Storms was struggling with a decision of whether or not to apply for a position at Wheaton College, part (though certainly not all) of what helped him to understand that God wanted him to take the position was events such as: turning on “Wheel of Fortune” and hearing Pat Sajak introduce a contestant from Wheaton, Illinois; opening the newspaper and seeing an article about Dallas Cowboys player Kenny Wheaton; walking into a room and seeing Wheaton College written on a whiteboard. He concludes, “Coincidences? Chance happenings? Meaningless serendipities? I suppose some, perhaps many, may be led to conclude precisely that. That’s usually the case with such events until they happen to you.”

The second part of the book discusses the wedding of word and spirit. In this section Storms explores the divide between Calvinists and charismatics, or more properly, between cessationists and charismatics. He compares and contrasts the emphases of each of the traditions and discusses their beliefs on prayer, miracles, preaching, worship and so on. Some of this is good and Calvinists would do well to learn from the author. Some of it is downright absurd, particularly when the author resorts to rash generalizations. At one point Storms says, “[Cessationists] often treat worship as little more than an unavoidable prelude to the exposition of Scripture, after which the service is considered over.” I have attended many, many churches led by cessationists and can testify that cessationists love singing and regard it as far more than an “unavoidable prelude!” A lack of clapping and dancing does not necessarily make the experience any less worshipful or meaningful to the participants! Storms makes another generalization in discussing revival. “When asked, ‘What does the church need most?’ cessationists and charismatics offer differing remedies. The former see the church in desperate need of reformation, which typically would take the form of greater clarity of theological conviction,” etc. charismatics, he says, long for revival. I would suggest that very few cessationists, or at least Calvinists, seek a second reformation but also long more for revival, though a revival of biblical theology.

The final part of the book, entitled “He is There and He’s Still Not Silent,” is a fairly brief discussion of how God speaks to us today. Storms affirms correctly that God primarily speaks through the Scripture and that only Scriptural guidance is inerrant. Yet he affirms that God does speak in other ways, most usually through promptings and stirrings. In one chapter he critiques Jonathan Edwards’ concerns with those who allow themselves to be led by fresh revelation. Storms, relying on Dallas Willard’s teaching on this subject, suggests that “God puts words, phrases, sentences, images and the like into our minds, stamped with the indelible print of his voice.” While he does not deny the subjectivity of these impressions, he believes them to be a valid means of communication and suggests that people will grow more accustomed to knowing what is God’s voice and what is not as they gain experience. “After repeated experience, through trial and error, we come to discern the familiar way in which God speaks. God’s voice is self-authenticating. When you hear it, it has the “feel” of God. There is a sense of authority to his voice. God’s voice bears within itself the marks of its divine origin.” While there is no lack of prooftexting in this section, what is missing is clear scriptural proof that the way God spoke in biblical times continues to be normative today. But as I pointed out at the beginning of this review, that seems not to be the purpose of this book.

While I admire much of Storms’ ministry and have benefited greatly from reading some of his previous writings, and this book was useful in helping me understand how charismatic teachings are blended with Reformed soteriology, it that did little to challenge me or to convince me to set aside my cessationist beliefs. I suppose it is a bit ironic that Storms seems to fall back into the greatest criticism Calvinists have towards charismatic teachings: very few people offer substantial scriptural proof for them and rely instead on experience as the final arbiter of truth. Many arguments in this book seem to boil down to, “you will just know when you experience it” or “disbelief is usually the case with such events until they happen to you.” I am thankful to see Calvinists and charismatics who agree on the foundational doctrines of the faith coming “Together for the Gospel,” but see no biblical foundation to support the type of convergence Storms suggests.

Convergence seems to be available only through samstorms.com.