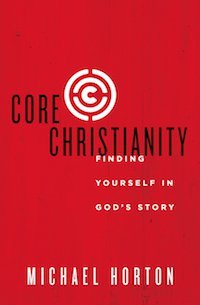 Core Christianity: Finding Yourself in God’s Story is Michael Horton’s attempt to tackle the essentials, the basic beliefs that all Christians share. “The purpose of this book,” he says, “is to help you understand the reason for your hope as a Christian so that you can invite others into the conversation. This book is for those who are tired of being starring characters in their own life movie. You want to be written into God’s unfolding drama. But where do you start?” You can start with this book.

If you are familiar with Horton’s work, you know that he so often frames Christian truth around four Ds: drama, doctrine, doxology, and discipleship. While the central focus of this book is the second D, it relies upon all of them. Drama refers to the “unfolding drama that runs from creation and the fall to exodus and redemption all the way to the new creation.” Drama yields doctrine, the facts, the “stable nouns” of the Christian faith. Doctrine rooted in the drama “fills us with thankful hearts—doxology, meaning ‘praise’.” This is our heartfelt, worshipful response to who God is and what he has done. And finally, “doxology yields the fruit of love and good works—discipleship. We are turned outside of ourselves, looking up to God in faith and out to our neighbors in love.”

If we are Christians “we need to know the story and its meaning for us. We need to internalize it, responding appropriately to the God who acts. And then we need to be increasingly conformed to the central character as we live as his free people in service to others. In other words we need to engage in theology, which is the story of God.” He explains that “biblical doctrine is not just a head trip. It is an unfolding story in which God invites us to play the part that he created for us from before the foundation of the world (Eph 2:10). Far from a distraction, to know what you believe and why lies at the heart of your Christian experience, worship, and everyday living.”

No wonder, then, that this book focuses on doctrine. It is, in its own way, a simple and user-friendly systematic theology, an exploration of the doctrine revealed in the Bible. Beginning with “Jesus Is God,” Horton advances to “God Is Three Persons,” “God Is Great and Good,” and “God Speaks.” He continues to “God Made the World but We’ve Made a Mess of It,” “God Made a Promise,” “Joy to the World!,” “Jesus Is Lord,” and then finally to “What Are We Waiting For?” and “In the Meantime: Callings.” If you are familiar with the standard categorizations of Christian doctrine you will recognize these headings as simple ways of advancing through sublime and substantial truths.

In every chapter Horton looks at doctrine but then carefully places it within the grand drama unfolding around us and points to its implications on doxology and discipleship. This ensures that doctrine never lives on its own, that it never remains abstract, but that it always points to God’s purposes and to its necessary implications in our hearts, minds, and lives. It is a powerful, stirring progression.

Core Christianity immediately takes its place as one of my favorite introductions to the Christian faith. It is one I will recommend often and distribute widely. Scot McKnight observes that it is fit for today’s generation in much the way John Stott’s Basic Christianity was fit for his generation. I couldn’t agree more.

I want to offer three situations in which Core Christianity may prove especially helpful. First, mature Christians can read it as a refresher on the essential truths of the faith. They will want to read it as well to see those core truths placed carefully within the context of drama and working themselves out in doxology and discipleship. They may even want to use it as a springboard to Horton’s more substantial works Pilgrim Theology and The Christian Faith. Second, new believers can read it as a means of becoming grounded in the faith, as an early exploration into the infinitely deep content of Christianity. Finally, small groups, discipleship groups, or one-on-one groups can read it together as a means of mutual edification and encouragement. In every case I am convinced it will prove its value.