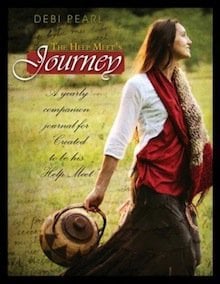 There are parts of the Christian life that can be easier caught than taught. A godly mentor is able to serve as a powerful display of the way truth works itself out in a life. The second chapter of Paul’s letter to Titus commands older women to take an active role in mentoring those who are younger and Debi Pearl steps into the role of mentor in Created To Be His Help Meet. At the time of writing this review, it has been on the market for 8 years, yet it is still ranked inside the top 3,000 books on Amazon and sit at #35 on the list of marriage books. It is selling well and is gaining influence.

Pearl seeks to be the Titus 2 woman, sharing with her readers wisdom that she has accumulated in many years of being a Christian, of being a wife, of raising a family. But there is a serious problem. Throughout the book, Pearl shows that she is a poor and unwise mentor. In place of the wisdom and the fruit of the Spirit that ought to mark a mentor, she displays a harsh and critical spirit, she offers foolish counsel, she teaches poor theology, she misuses Scripture, and she utterly misses the centrality of the gospel.

(Note: I am familiar with some of the controversy surrounding the Pearls and what they teach regarding disciplining children. To keep this review focused, I will not discuss their child-raising techniques.)

Created To Be His Help Meet is not entirely bad, of course, and Pearl offers several valuable insights. She and I agree that the Lord has created women to be distinct from men not only in body, but also in role. In his wisdom, the Lord has given to men the position of leadership in the home and he has given women the complementary, helping role. She says, “When you are a help meet to your husband, you are a helper to Christ, for God commissioned man for a purpose and gave him a woman to assist in fulfilling that divine calling. … As we serve our husbands, we serve God.” Pointing to the Trinity, she shows that there is nothing inherently undignified in a helping role: “Men are created to be helpers of God. Jesus willingly became a helper to the Father. The Holy Spirit became a helper to the Son.” She shows that a husband and wife who embrace these roles are able to be a display of Christ and his church. “Knowing that my role as a wife typifies the Church’s relationship to Christ has molded my life. As I reverence my husband, I am creating a picture of how we, the Church, should reverence Christ.”

That broad theology of complementarity is a consistent thread from the first chapter to the last and, when combined with some wise and clever insights, assures that there is some value in this book. Alas, these nuggets of gold are surrounded by too much waste, too much folly masquerading as biblical wisdom.

Perhaps most troubling and most noticeable of all the book’s weaknesses is the anger and harshness that pervades and influences so much of what Pearl says. This is one of the harshest, angriest books I have read on this side of Richard Dawkins and this critical spirit is displayed in insulting language, in lack of sympathy, and in the passing of harsh judgments.

Here is an example from early in the book: “A few years back, there was an overweight hillbilly woman who worked in the local store in our hometown … this woman was ugly, I mean hillbilly ugly, which is worse than regular ugly.” Not surprisingly, this woman does not end up being the hero of the short story Pearl tells of her. First she mocks her ugly appearance, and then her ugly demeanor.

At one point Pearl describes a woman she had conflict with and labels her “The Crazy Lady.” When this woman eventually has an apparent nervous breakdown, Pearl is quick to determine that this breakdown was God’s judgment upon her, saying “God had visited her with madness. He does ‘fearful’ things like that.” Never is there even the smallest shred of grace or sympathy in her words or her tone; never does she consider that this woman may have suffered from a mental illness.

When a woman writes to ask Pearl how to deal with a husband who idolizes television and allows their young children to view inappropriate shows, Pearl responds by telling her to imagine the day her husband leaves her. “You will wonder if the baby-sitter is having her boyfriend over for a little sex in the bedroom while the kids watch TV alone. The young children will cry when you leave for work, and the older children will be glad to see you go so they can exercise their new found liberties.” It goes on for a long and taxing paragraph before Pearl writes, “Now, Susan, let’s come back to the present. If you continue to dishonor your husband, the above scenario will likely become our own personal nightmare—soon! … The Devil would love to steal your children’s souls. He will not do it through your husband’s TV; he will do it through your dishonor.”

Shortly after this tirade she begins another about “a new breed of woman today,” describing women who have gone through divorce and are now single moms. “They dress cheaply; their hair has a ragged cut, and the dark circles under their young eyes testify to their faded hope.” Even though a husband was addicted to pornography or had anger problems, it is the wife who brought about her divorce. “It all started when you were mad about a TV commercial, or when he watched the car races on a Sunday afternoon. It got worse when he wanted you to do something exotic sexually. Divorce is never planned, but is almost always preceded by certain avoidable reactive behavior and events. Don’t let it happen to you.” A consistent thread in the book is that a failing marriage is always—or very nearly always—the fault of the wife; she is the one to blame, regardless of what her husband has contributed to the problem.

For women who struggle with accepting their husband’s sexual advances she offers this counsel: “Don’t talk to me about menopause; I know all about menopause, and it is a lame excuse. Don’t talk to me about how uncomfortable or painful it is for you. Do you think your body is special and has special needs? Do you know who created you, and do you know he is the same God who expects you to freely give sex to your husband? Stop the excuses!” This is always a difficult and sensitive issue, yet Pearl offers not a trace of sympathy and absolutely no grace.

When a woman writes Pearl to ask advice on honoring a husband who is so lazy that the house and property are falling apart, Pearl has her take a “A Dumb-Cluck Test” and then asks, “Well, are you a dumb-cluck? … You asked me, ‘What should I do?’ You should get off your easy chair and learn to do a thing or two.”

Another story involves a young woman who reacted with visible irritation when her husband put his arm around her. Even though Pearl knew nothing of the context to this action, she was just a spectator from across the room, she says, “I wanted to get up and shake that girl until her teeth rattled. It would have shocked her to know that everyone in the room felt extreme disdain toward her…” Well, we know that at least one person felt extreme disdain for her, but by now you are seeing that this is rather common in the life of Debi Pearl. She is a harsh, critical and angry person and this ugly tone pervades this book. Where is the love, joy, peace, patience, kindness, goodness, gentleness and self-control that ought to mark the Christian, and especially the Christian mentor? Who would want their wife or their daughter or anyone else to be mentored by a harsh, graceless, angry person like Debi Pearl?

Much of what Pearl teaches in this book comes via answers to letters she has received. She consistently offers poor, even shocking, counsel in her return letters.

To one woman she says that if her husband sexually handles their children, that woman must call the authorities (wise!), but then she tells her that she ought to bring the children to visit their father in prison three to four times a year (potentially extremely unwise depending on the situation!). Not only this, but she tells the wife that is she does this, it will certainly win her husband to the Lord so once he is released, they can get on with life. This is far too terse and has far too little nuance to be at all helpful.

She quietly warns women away from close friendships with anyone but her husband, suggesting that for a woman to bond with another woman in this way is “a perverted expression of woman satisfying woman.”

A woman who is suspicious that her husband may be carrying on an emotional, or perhaps sexual, affair is told that she needs to “learn to use her feminine wiles” to woo him back. With no knowledge of the facts, Pearl calls the husband’s secretary a “cheap slut” and passes all manner of judgment on her. She advises this wife that instead of confronting her husband in any way, she should ooze sexuality and constantly seduce him in order to show him what he is giving up. This will work, she says. Her source of authority here is not Scripture but Loretta Lynn and her song, “You Ain’t Woman Enough to Take My Man.”

It may be no surprise at this point that Pearl seems to have no real theology of the local church. Speaking of how she submits to her husband she writes, “there is no pastor or minister higher than my husband.” In fact, if a pastor claims authority, he is, according to her husband, “a liar and a deceiver.” With the local church out of the picture, there is no court of appeals, nothing between submission to husband and calling the police. So when a husband dresses like a woman and wants his wife to engage in perverse role-play, she can do nothing more than tell the woman to express her disgust and to tell her husband that he is going to hell. There is no room for this woman to seek counsel and help in the local church. In neglecting the role of the church and the God-given spiritual care and authority of the local church, she neglects a great means of grace to the Christian.

Much of Pearl’s counsel is utterly heartless and even that which is not is too often proud and terse and utterly devoid of biblical wisdom. She displays a distinct lack of wisdom.

Tomorrow I will show how she misuses Scripture and how she teaches poor theology. I will also suggest some superior alternatives to this book.