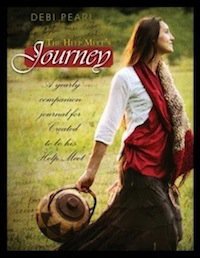 Part one of my review of Debi Pearl’s Created To Be His Help Meet showed that even though I agree with the broadly complementarian thrust of the book, it is marked by a harsh and critical spirit and offers far too much foolish counsel. Today I want to point to three more concerns: poor theology, poor use of Scripture and far too little gospel. If you have not yet read the first part of the review, I’d recommend doing that before reading what follows.

Throughout the book, Pearl teaches poor theology, especially when it comes to her understanding of how a husband and wife are to relate within their God-given roles. Here are a few representative quotes:

Though she affirms a broadly complementarian position, Pearl goes much too far when she says that a woman’s deepest purpose and deepest meaning is bound up in her husband and that she is “good” only in relation to her husband. This would mean that a single woman has no purpose and meaning, even though the New Testament extols the single life when that singleness is offered to the Lord. Similarly, it is audacious, and just plain wrong, to say that no single man can adequately express the image of God. Was Jesus then an inadequate expression of manhood? If our unmarried Lord was less than “a well-rounded image of God” we are without hope and without a Savior. She far overstates a biblically-consistent complementarian understanding of the purpose for which God created men and women and the nature of the relationship between them. As she does this, she undermines the very position she seeks to affirm.

When Pearl describes how authority and submission work themselves out within marriage, she often makes broad statements that are entirely lacking in nuance. “A husband has authority to tell his wife what to wear, where to go, whom to talk to, how to spend her time, when to speak and when not to, even if he is unreasonable and insensitive, but he does not have authority to command her to view pornography with him or to assist him in the commission of a crime. … Wives are to obey an unreasonable and surly husband, unless he were to command his wife to lie to the Holy Ghost.” Such statements are far too broad to be helpful. As it is, they are lacking in nuance and torn from any useful context.

In place of a satisfying and biblical view of masculinity and femininity, she tends to offer little more than a dangerously inadequate caricature such as “[Men] like to play or watch games where they knock each other down, just to prove who is the strongest and toughest. Everything they do must end with a testosterone-driven climax.” Femininity is similarly caricatured: “He likes best a woman who will give him a token struggle and then surrender to his wit, charm and strength. He must thoroughly conquer. It is a battle I always enjoy losing. I like to be conquered and consumed by my man. That is my created nature.” We do not read about Jesus reaching testosterone-driven climaxes in wrestling matches with his disciples. You do not see Jesus, surely the best of men, in her caricatures. Neither do you see many other good men.

In a chapter dealing with sex, she says of a husband, “Making his wife feel glorious when he touches her is the ultimate test of his manhood—the very measure of the man” and “God made man to need sex. He must be relieved of his built-up sexual desire, even if it means spilling his seed in his sleep.” In her view, men appear to constantly teeter on the edge of control and only a woman’s regular sexual attention will hold him at bay. His sexual desire is a need that a wife must satisfy lest they both suffer the consequences of his lack of self-control. While Scripture tells us that sex is a crucial component of marriage, it never tells us that sex is a need like eating and breathing; it never even hints that the measure of a man is his ability to please his wife in the bedroom.

At one point Pearl relates a long and detailed story–not the kind of story you would want a young woman to read–in which a woman wearing a tight skirt stands up in front of a young man during a worship service, causing him to spontaneously ejaculate. (Yes, a spontaneous erection and spontaneous ejaculation, all in an instant. That seems like quite a feat, even for a hormonal fifteen year-old.) She uses this story as proof of the importance of modest dress.

And so it goes. There are many, many examples of a twisted or just plain wrong view of masculinity and femininity and many other areas where the theology she teaches is subtly or completely unbiblical. Her view of masculinity can barely account for Jesus Christ, of all men the one who most exemplified what it means to be a man (and of whom we have no record that he had to be relieved of built-up sexual desire).

Poor Use of Scripture

Pearl often uses the Bible to say what she needs it to say rather than what it actually says. For example, she quotes Sarah in Genesis 18:12: “After I am waxed old shall I have pleasure, my lord being old also?” She then relates this statement to sexual pleasure, even though the context tells us that Sarah was far more interested in the pleasure of an heir than the pleasure of an orgasm. She claims that David’s adultery with Bathsheba was actually Bathsheba’s fault. “Her lack of discretion cost her husband his life, his comrade-in-arms their lives, her baby son his life, and the integrity of one whom God upheld as a man after his own heart.” Yet, of course, Nathan, speaking on behalf of the Lord, called David to account, not Bathseba (though this does not necessarily mean that she was entirely without fault).

Looking to the first days of human history, Pearl suggests that Adam was lonely in the Garden of Eden before Eve was created. Many children’s Bibles have pictures of Adam pining away in the Garden, disappointed in his lot, but the Bible says no such thing. Adam had an awareness that there must be something—someone—out there who would complete him. After all, how could he be fruitful and multiply and fill and subdue the earth on his own? But he wasn’t lonely! How could he be lonely when he was in perfect and unbroken fellowship with God?

Looking to the first sin, Pearl says that the reason Satan tempted Eve was that Adam apparently could not be tempted. God has made men in such a way that they are nearly untemptable, but made Eve weak and easy to deceive. Satan, a masculine being, knew this, so approached the woman who “didn’t have the armor to ward off his fiery darts of deceit.” The Bible tells us that Eve was tempted rather than Adam, but it does not tell us that this was due to a deficiency in her nature.

Too often Pearl stretches Scripture far beyond its plain meaning, inserting ideas that are foreign to the text.

Law in Place of Gospel

All through the book there is a notable absence of gospel and the endless accumulation of law. Pearl never teaches the freedom that is found when a woman finds her identity in the gospel. Rather, she teaches that a woman’s deepest meaning, her very identity, is found in her role as a help meet. When the gospel is missing, we will always turn to law or to lawlessness. Pearl turns to law, constantly giving rules and mandates and commands, but never grounding them in the good news of what Jesus Christ has done.

We see her graceless, legalistic God in words like these, taken from the book’s final pages: “God is awesome and terrible in his judgments. He is also full of mercy, and of grace. His strong desire is to bless his people, but too often by our ‘carelessness,’ we force him to judge. I believe he wearies of judgment.” Pearl presents a God who offers mercy and grace only to those who please him. To the rest there is judgment. This is a God who reacts to our every careless or thoughtful deed with anger and judgment. He is gracious only when we do what he demands, only when we earn his favor. And this means, of course, he is not a God of mercy and grace at all, not when his favor must be merited.

She seems to have no category for a woman who does her absolute best, who does everything by the book, who submits to her husband’s every whim, and who still has a failing marriage. “It doesn’t take a good man, or even a saved man to have a heavenly marriage. But it does take a woman who is willing to honor God and by being the kind of wife God intended.” In other words, she has no category for God’s sovereignty, for his good purposes beyond our best efforts. She teaches that if we do our bit, God will do his. After all, we’ve earned his favor. Though she may make a kind of gospel call in the book, that gospel does not pervade life beyond that moment of salvation. This may be the most tragic shortcoming of them all.

The Titus 2 command for for older Christian women to serve as mentors to younger Christian women is too good, too important to ignore. Yet the ideal mentor offers not only years, but also spiritual maturity and evidence of God’s sanctifying grace. From the first page of Created To Be His Help Meet to the last, Debi Pearl shows that she is an unsuitable mentor; her counsel is too often foolish, her words too often harsh, her grasp of Scripture and theology inadequate and, not surprisngly then, her grasp of the utter centrality of the gospel almost completely missing. I would recommend avoiding this book at all costs.

Here are some alternatives that will prove far more valuable: