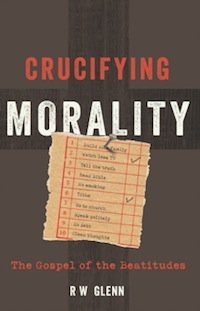 Buy from Amazon Buy from WTS Bookstore
No one could possibly claim that the Beatitudes (see Matthew 5:1-12) are overlooked or underappreciated. They have been the subject of countless books and sermon series. But this is not to say that the Beatitudes have been widely understood and properly taught. As often as not they have suffered from moralization, reduced to the level of the fortune cookie and with all the spiritual power of a fortune cookie.

In Crucifying Morality, R.W. Glenn takes a new look at the Beatitudes saying, Maybe you “were taught that the Beatitudes were the highest form of morality that anyone could live by, and you know now how impossible they are. Or maybe you experienced the flannelgraph version of the Beatitudes.” If that is the case, “maybe it is time to get unfamiliar. Maybe you need to read these verses with fresh eyes for the first time. Whatever your exposure to the Beatitudes has been, you probably think of them as less powerful and captivating and helpful than they are. Take a step back to see how breathtakingly radical their real message is.”

The fact is that

the flannelgraph and the saccharine tone of those reductionist Sunday school lessons can’t get the job done. Jesus’ teaching is too radical to be stuck on felt. He uses counterintuitive gospel logic to show us that life in the kingdom of God is completely contrary to what we expect. In fact, we could not have predicted it. Kingdom blessing looks like the opposite of everything we value. So don’t moralize the Beatitudes, sterilizing the gospel as though it is primarily or even only a rule book for nicer living. You cannot put the mind-altering, world-shattering nature of the Beatitudes into neat categories. Jesus won’t let you.

Glenn wants the reader to contemplate this: “It is no accident that the Beatitudes contain no imperatives whatsoever. Because we are wired for performance and have an insatiable hunger to turn Christianity into a system of dos and don’ts to earn a spot at the table of grace, we feel almost irresistibly inclined to turn them into commandments. Instead, they are the qualities that begin to characterize sinners who encounter God’s grace in the gospel.” We need to be careful not to read the Beatitudes as a series of commandments because when we do that we empty them of their true power.

After all, “the Beatitudes are a profile of the Christian. They are a description of people who would never dream of turning the characteristics God has given them by grace into a list of moral commands because they know that Jesus has crucified even their best attempts at self-centered, self-propelled morality on the cross.” The Beatitudes are not a list of dos and don’ts that get you into God’s kingdom, but a list of declarations of what a child of the kingdom looks like. Where too many people reduce Christianity into a system of achievement in which you do certain things in order to gain life, the Beatitudes instead show Jesus saying, “I have done this, so you can live.”

With all of that in place, Glenn proceeds through the Beatitudes pausing to explain and apply each one. He shows that perfect conformity to the Beatitudes is absolutely essential to our salvation and then points to Jesus Christ as the one who has perfectly kept them on our behalf. In fact, Jesus is the Beatitudes. And now, through the work of Jesus Christ, they are character traits that mark the person who has encountered the gospel of God’s amazing grace.

Crucifying Morality is an antidote to performance-based religion, a temptation that is always near to each one of us. It is an antidote to a grave misunderstanding of the Beatitudes that eviscerates them, reducing them to an impossible to-do list. It is a powerful call to live out of the joy and freedom of the gospel.