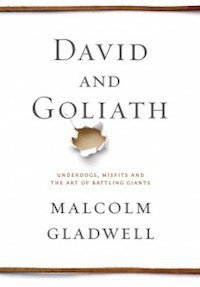 For quite some time now, Malcolm Gladwell has been one of my favorite authors. He is a skilled wordsmith to be certain, but what compels me even more is the way he draws connections between facts and statistics that otherwise seem to have nothing in common. His great strength is finding significance and even fascination in the mundane. The Tipping Point, Blink and Outliers were all fascinating books.

Gladwell’s latest is David and Goliath and here he challenges how we tend to think about obstacles and disadvantages. Where we do all we can to avoid obstacles and disadvantages, and where we consider them necessarily negative, Gladwell believes they can actually make us better and stronger. “David and Goliath is a book about what happens when ordinary people confront giants. By ‘giants,’ I mean powerful opponents of all kinds—from armies and mighty warriors to disability, misfortune, and oppression.” Each of the chapters tells the story of a different person who has faced a great challenge and been forced to respond to it.

Through the book he explores two big ideas:

The first is that much of what we consider valuable in our world arises out of these kinds of lopsided conflicts, because the act of facing overwhelming odds produces greatness and beauty. And second, that we consistently get these kinds of conflicts wrong. We misread them. We misinterpret them. Giants are not what we think they are. The same qualities that appear to give them strength are often the sources of great weakness. And the fact of being an underdog can change people in ways that we often fail to appreciate…

He begins with the biblical story of David and Goliath in the valley of Aijalon, saying that where we tend to think of Goliath as having all the advantages over David, in actual fact it was David who had the advantage. While his interpretation of the story borders on the fanciful and ignores the obvious divine empowerment behind David and the shadow of a much greater David, his point stands. From there he writes about little league basketball, the battle against cancer, the quality of university graduates, Northern Ireland’s Troubles, civil rights leaders, and much else. Each of the stories highlights an apparent disadvantage and how it was actually anything but.

While I enjoyed reading David and Goliath, I found it more enjoyable on the descriptive than prescriptive level. In one much-discussed chapter Gladwell shows how having dyslexia may actually offer advantages to some who have it. Though he makes a compelling case, I don’t know what that does for me or how I can apply that knowledge to my life. Not only that, but he does not speak to the many people for whom dyslexia has only ever proven a disadvantage. One or two men who have risen to fame despite the condition hardly prove that it is an advantage. The book suffers from a confirmation bias and from too little interaction with dissenting views.

Gladwell wants us to believe that people succeed because of their difficulties rather than despite them. But in many cases I don’t think we can so easily determine this. We are unique individuals, a conglomeration of strengths and weaknesses, so that one man’s advantage may be another man’s disadvantage. But this would hardly make a compelling book.

This is the first of Gladwell’s books I’ve needed to push myself to finish. My interest waned. Where I usually finish his books in a day or two, this one hung around for a week. That may say as much about me as it says about the book, but I find it noteworthy. In the end I just wasn’t convinced and I wasn’t all that interested. There is plenty of human interest in this book, but not a lot that I will apply to my life.