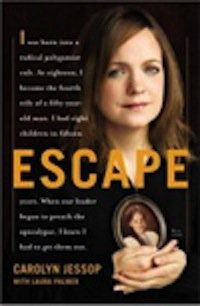 Buy from Amazon
Escape is undoubtedly one of the most bizarre memoirs you are ever likely to read. It is small wonder that it quickly made its mark on the New York Times list of bestsellers. Written by Carolyn Jessop, a woman who was born into the Fundamentalist Lattery Day Saints (FLDS), the book describes what it is like to live as part of this cult which is distinctive primarily for its beliefs about polygamy. The FLDS, which emerged in the 1930s as a fundamentalist offshoot of the Mormon church, holds that God has ordained polygamy and not only that, but that it is a requirement for anyone who wishes to attain the highest level of heaven. Most men eventually have at least three wives, with more prominent members of the cult holding far more than that. Some of the leaders are believed to have fifty, sixty, or even one hundred wives. Women are generally placed with husbands at the whim of the cult’s leader (who claims to receive divine guidance about which women belong with certain men). There are around 10,000 adherents to this cult living in the United States today.

Jessop was born into a family that eventually had two wives but one that, compared to others in the community, seemed almost normal. When she was just eighteen, though, she was assigned to become the fourth wife of a fifty-five year old man. While she was married to him he added two more wives and later went on to add five or six more. Through fifteen years of marriage, Jessop gave birth to eight children. Through her marriage she suffered constant abuse at the hands of her husband, his other wives, and other members of the community. Though for much of her life she believed the claims of the FLDS religion, she eventually began to see through its hypocrisy and decided that, for the good of herself and her children, she would need to escape from it.

Escape from FLDS is not easy. Their tight-knit communities have immense power and wealth. Even the local police officers are members of the cult and will not support a wife who seeks to emancipate herself or her family. Until Jessop, no woman had managed to escape the clutches of the cult with all of her children. Jessop, though, ran from the cult and fought against it in the courts, eventually winning full custody of her eight children. This was no small victory. In fact, it was worth telling in a book.

While the book is a definite page-turner (as both my wife and I can attest) it is not always easy to read. The descriptions of life in the FLDS are at times horrific. There were several areas that I found particularly interesting.

Jessop is frank (though not vulgar or graphic) in her discussions about sexuality within her plural marriage and well she needs to be, for sex plays a strange but crucial role in these marriages. Though the women generally hate their husbands, they still want to have sex with him—not for the sake of love or intimacy, but because sex is power. The wife who gains sexual favor with her husband is the wife who can use him to further her own desires. Often these desires pit her against the other wives. It is an odd situation where wives who hate their husband seek to have sex (which they hate) with their husband (whom they hate) so they can further their hate-filled plans towards each other. So much, then, for the idealized content of “sister wives” that the cult seeks to portray to the world.

This book and its description of life within plural marriage shows that marriage—marriage as given to us in the Bible—serves as protection for women. When people ignore biblically-ordained marriage, women immediately lose the protection it affords. They quickly become subservient to men. The women always lose out.

Perhaps the most shocking thing to remember while reading the book is that it takes place in twenty-first century America. This is not fundamentalist Islam in the Middle East; this is not the earliest days of Mormonism. This is happening in the very heart of America—women are treated like cattle, used to breed children and bought, sold and traded like so many goods. In America. It is almost unbelievable.

While the FLDS is hardly an accurate representation of average religion and bears little resemblance to Christianity or even to Mormonism, this portrayal is increasingly what people think of when they think about religion. More and more people are becoming convinced that all religion tends towards extremism and a book like this may just fuel those fires. This story is awful to read, but it is written well and is for some reason quite fascinating.