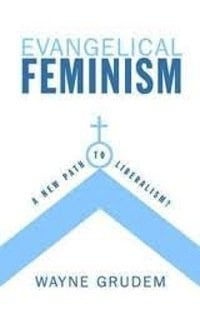 The latest addition to this list is Evangelical Feminism: A New Path to Liberalism?. Grudem describes this book as “an expression of deep concern about a widespread undermining of the authority of Scripture in the arguments that are frequently used to support feminism. It is also a way of posing a question: can a movement that espouses this many ways of undermining the authority of Scripture possible be right?” The book’s argument, then, is that evangelical feminism sets those who affirm it on a slippery slope that will inevitably lead to liberalism.

It is important to define terms and Grudem, always a deliberate author, does just this. By theological liberalism he refers to “a system of thinking that denies the complete truthfulness of the Bible as the Word of God and denies the unique and absolute authority of the Bible in our lives.” And by evangelical feminism he means “a movement that claims there are no unique leadership roles for men in marriage or in the church.” Leadership in both the home and the church is to be shared equally between men and women according to their gifts and desires. He leads readers through five points:

These dire predictions aside, Grudem is careful to affirm that there are some egalitarians who continue to uphold the authority of Scripture (men like Roger Nicole, Walter Kaiser, Jack Hayford, etc) but warns that, while these men may remain orthodox, those who follow them will likely drift further and further from affirming the authority of Scripture, for this is a common pattern in the church. These men, despite their good intentions and their love for the Bible, may be inadvertently leading the next generation astray.

The heart of the book is contained in two sections. The first, with fifteen short chapters, examines evangelical feminist views that undermine or deny the authority of Scripture. These range from saying that Paul’s teaching on women’s roles was just plain wrong, to suggesting that women may preach or teach men as long as they are under the authority of a pastor, to relying on experience as the arbiter of what is right and true. The second section, with ten short chapters, examines evangelical feminist views that are based on untruthful or unsubstantiated claims. These include those who teach that Paul told the women in Corinth to “keep silent” because they were disrupted church services, that the word “head” actually means “source,” and that the Son is not subordinate to the Father in the Trinity. Grudem concludes “I cannot say for sure. But I can think of no other viewpoint or movement within the whole history of the Christian church (except theological liberalism itself) that has generated so many novel and ultimately incorrect ways of interpreting the Bible.”

Having provided the facts and having provided brief analysis, Grudem finally seeks to understand where evangelical feminism is taking the church. He concludes that the next step is to deny anything distinctly masculine. At the foundation of evangelical feminism, he feels, is a dislike of manhood itself. This will lead to a denial that there is anything uniquely masculine about God and allow people to refer to God as Mother. The danger here, of course, is that calling God “Mother” “is changing God’s own description of himself in the Bible. It is calling God by a name that he has not taking for himself. Therefore it is changing the way the Bible teaches us to think of God. It is thus changing our doctrine of God.” The final step along this trajectory is the widespread acceptance of homosexuality. Those who advocate the morality of homosexuality within a biblical context are using the very same arguments used by evangelical feminists. Churches that accept the arguments of evangelical feminists will have very little ground to stand on when they attempt (or if they attempt) to uphold the biblical condemnation of homosexuality.

What is ultimately at stake in evangelical feminism is the Bible itself. I appreciated Grudem taking his argument to its fullest extent and showing what is truly at stake here. Too often arguments about issues like evangelical feminism can proceed no further than the doctrine itself. I think Grudem has done the church a great service in showing and proving that this discussion is not merely about how particular churches operate. Rather, based on this discussion we can see which churches can remain faithful in the future and which will inevitably drift further and further from the authority of Scripture and thus further and further from God himself. If evangelical feminism is, indeed, a new path to an old problem, Grudem has shown just how seriously we need to take it.