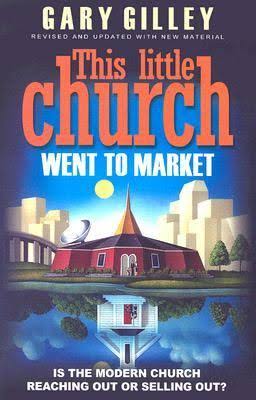 Buy from Amazon
Though I have never met him, Garry Gilley has had a signficant impact on my life. He was one of two people who was most influential in my decision to begin this web site and to review books. His many book reviews were very helpful to me and made me realize that if he could review books and post them on the web, I could too. I have long wanted to read his books and just recently was given a copy of This Little Church Went to Market.

This book is a damning indictment of the market-driven churches that are so popular today. Having extensively studied the issues Gilley writes about in this book, I am comfortable saying that this is the best introduction to “the church in the age of entertainment” that I have read. Gilley contends that the church has sold out to our culture so that the influences of the culture have become the influences in the church. The most significant forces pressing against the church are entertainment, market driven philosophies and psychology. These three are largely absent from the Bible, yet are startlingly prevalent in evangelical churches. The leaders and issues he concentrates on most are Rick Warren and his book The Purpose Driven Church, Bill Hybels and Lee Strobel.

Having discussed the forces that are impacting the church, the author spends several chapters examining how these forces have impacted evangelical churches. He quotes extensively throughout the book from other believers who have covered this topic such as John MacArthur, Os Guinness and Michael Horton as well as from unbelievers such as Neal Postman. Finally he concludes that churches built on seeker sensitive model will be built on the wrong foundation, will teach the wrong message, will focus on the wrong need and will misunderstand preaching and worship. In other words, these churches will bear little resemblance to a New Testament, Christian church.

Through this book Gilley manages to approach the topics in a rational manner and never comes across as being obnoxious or blinded to the heart of the issues. He truly does understand both the New Testament model and the new evangelical model and is able to adequately compare them. The back cover tells us that the book “is a call for the Church to return to its scriptural roots” and that is right on the mark. This book examines contemporay issues and calls the church to return to the source to discover what God would have us be. I highly recommend this one.