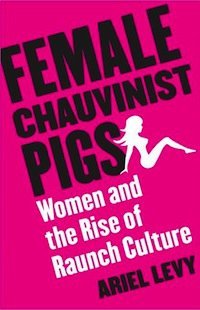 Ariel Levy and I could probably not be more different. She is a liberal, feminist, democratic, New Yorker. I am a conservative, biblical, Canadian Christian. Yet Levy and I share a common concern when we look at women in our culture. Not too long ago, Levy began to notice a change in women. “I’d walk down the street and see teens and young women – and the occasional wild fifty-year old – wearing jeans cut so low they exposed what came to be known as butt cleavage paired with miniature tops that showed off breast implants and pierced navels alike. Sometimes…the shirts would be emblazoned with the Playboy bunny or say PORN STAR across the chest… People I knew (female people) liked going to strip clubs (female strippers). It was sexy and fun, they explained; it was liberating and rebellious. My best friend from college, who used to go to Take Back the Night marches on campus, had become captivated by porn stars.” She discovered a raunch culture that had begun to interest women. This apparently “didn’t mark the death of feminism, they told me; it was evidence that the feminist project had already been achieved. We’d earned the right to look at Playboy; we were empowered enough to get Brazilian bikini waxes. Women had come so far, I learned, we no longer needed to worry about objectification or misogyny… If Male Chauvinist Pigs were men who regarded women as pieces of meat, we would outdo them and be Female Chauvinist Pigs: women who make sex objects of other women and of ourselves.”

What is going on with women in our culture?

Levy points an accusing finger towards this new breed of woman, the Female Chauvinist Pig, whom she describes as follows: “The Female Chauvinist Pig (FCP) has risen to a kind of exalted status. She is post-feminist. She is funny. She gets it. She doesn’t mind cartoonish stereotypes of female sexuality, and she doesn’t mind a cartoonishly macho response to them. The FCP asks: why throw your boyfriend’s Playboy in a freedom trash can when you could be partying at the Mansion? Why worry about disgusting or degrading when you could be giving – or getting – a lap dance yourself? Why try to beat them when you can join them?” Our culture’s obsession with raunch allows a woman an opportunity to prove her mettle, first among men but now among women as well. By engaging in the raunch that men enjoy, and that feminism initially combatted, women can flaunt their coolness and mark themselves as being tougher, looser, funnier – a whole new kind of woman.

To prove that the FCP is no mere invention or caricature, Levy takes the reader through a brief and somewhat biased history of feminism. She takes the reader into lesbian culture where a whole new type of lesbian, the “boi,” has arisen to mimic the heterosexual FCP. She is exasperated to learn that women express their empowerment by exposing themselves in Girls Gone Wild videos, by posing naked in Playboy magazine and by augmenting their bodies in any number of unnatural ways. But this is not something that is foisted upon women. Rather, it is a deliberate decision made by women. “We get to go to college and play sports and be secretary of state. But to look around, you’d think all any of us want to do is rip off our clothes and shake it.” And, of course, once it has been determined that it is normal and good for women to enjoy reading Playboy and to get breast implants and to be jealous of porn stars, the only alternative is to be uncomfortable with and embarrassed by sexuality. Raunch has become a litmus test of female uptightness.

In the most startling, convicting chapter, Levy leads the reader into teen culture and shows how teenage girls are increasingly becoming FCPs, or as she says, are “pigs in training.” She shows how teen girls are increasingly involving themselves in sexual encounters not because they feel sexual desire, but because they feel a desire to be cool and to obtain bragging rights. The most popular creative outlet for adolescent female energy seems to be “the expression of imaginary licentiousness through gesture, demeanor, dress.” It is imaginary, for the girls do not truly feel sexual desire. They simply mimic what they see and experience in their role models. Teens “live in a candyland of sex…every magazine stand is a gumdrop castle of breasts, every reality show is a bootylicious Tootsie Roll tree. And these are hormonal teenagers. This culture speaks to them…They are taught that sex is wrong until you have a wedding” yet see sex portrayed all around them. Here is the message the average girl derives from media: “Girls have to be hot. Girls who aren’t hot probably need breast implants. Once a girl is hot, she should be as close to naked as possible all the time. Guys should like it. Don’t have sex.” She says, correctly, that the way we educate young people about sexuality is not working. Culture bomards them with messages that are in direct opposition to what we teach them. Her solution is that “rather than only telling teens why they shouldn’t have sex, perhaps we also ought to be teaching them why they should. We are doing little to help them differentiate their sexual desires from their desire for attention.” For too many young women, sex is about ego, not love or lust. They understand sex to be a performance rather than a thrilling and engaging experience. Girls are almost afraid to experience arousal, lest they make sex into something just a little too significant. It is a tragedy that is unfolding in our neighborhoods. Perhaps even in our homes.

Having discussed the programming that pollutes our television screens, showing that these shows so often cater to a chauvinist point of view, she says that “Adolescents are not inventing this culture of exhibitionism and conformity with their own fledgling creative powers. Teens are reflecting back our slobbering culture in miniature.”

Levy’s final reflection, consistent with her feminist ideals, is this:

If we believed that we were sexy and funny and competent and smart, we would not need to be like strippers or like men or like anyone other than our own specific, individual selves. That won’t be easy, but ultimately it would be no more difficult than the kind of contortions FCPs are constantly performing in an effort to prove themselves. More important, the rewards would be the very things Female Chauvinist Pigs want to desperately, the things women deserve: freedom and power.

It is not difficult for me to extend her conclusion and adapt it to a Christian worldview. If women believed that they were sexy and funny and competent and smart, and were to return to the biblical ideals for womanhood, they would not want or need to be like strippers or like anyone other than their own, specific, God-ordained selves. The rewards would be the freedom God promises and provides to those who live in the way He created us to live. Freedom – true freedom – is found only when we live within His will for us. When women act as biblical women, they will gain tremendous power and freedom.

This book is frank and sometimes crude. Levy’s disgust with the FCP is clear. She understands, as do many men, that the FCP is the type of feminist men can handle. What more could men want then women who will give much and require little? Women who will give men exactly what they want, all the while acting as if they enjoy it just as much as the men do. Yet the book is not without its problems. Levy takes the cheap shots at George W. Bush that seem to be a necessary component of so many books these days. Ironically, she tacitly commends Bill Clinton, all the while ignoring his significant contribution to the very problem she deals with in this book. Few men have done more to advance the cause of FCPs than Bill Clinton! Her feminist biases are obvious throughout the book. Yet, while I cannot agree with her proposed cure, her diagnosis seems sound. Her feminist frustration with contemporary women is much the same as the frustration Christians feel as they survey women in our culture.

Feminism has failed women. Levy would not agree with this, of course, and would call women back to the ideals of feminism. Yet we would do better to call them back to the Bible’s ideals for women. God, who created men and women, and who thus created manhood and womanhood, has given us instruction on how we are to live within our roles as men and women. We need to look back to the author of manhood and womanhood and recover the beauty of the roles He created for us. That is were true beauty and freedom will be found.