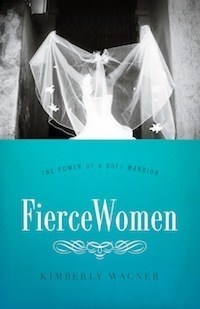 I knew Aileen was a keeper from the first day we met (in high school) and from the first words she ever spoke to me (“I’m going to kill you!”). I can’t quite say it was love at first sight, but it wasn’t too far from it. I appreciated that she was feisty and not the least bit boring. The more I got to know her, the more intrigued I was by her strength and the more I wanted to take hold of that strength, and the woman behind it.

There are rumors out there, perhaps deliberately sown or perhaps just based on a misunderstanding, that men who hold to complementarian theology want their women weak. There are some who state that those who believe God has created men and women to fulfill different functions and to take on different roles in life and marriage want women to be pushovers or doormats. Stuff and nonsense, I say.

Recently Aileen bought Fierce Women: The Power of a Soft Warrior by Kimberly Wagner, and after she read it, she asked me if I would do the same. She had enjoyed it so thoroughly, and felt it spoke to her so deeply, she wanted to get my take as well. I was glad she asked.

Fierce Women is part biography and part theology. Kimberly Wagner is a strong woman. She has a strong personality, a strong faith in Jesus Christ, an extensive knowledge of Scripture, and a lot of natural ability. And yet for much of her life and marriage she had misused this strength. She tells the story behind her own marriage, what almost destroyed it, and what began to rebuild it. “Often marriages are caught in a destructive relationship dynamic that I call the Fierce Woman/Fearful Man cycle.” This was exactly the case in the early years of her marriage, where she had used her strength against her husband rather than using it to bless him. She had exacerbated his weaknesses instead of complementing them with her strength.

I often tell men that while “fear of man” may be the theological category, “fear of wife” is the way it commonly plays out. Men who may lead hundreds or thousands in the workplace are terrified to lead in their own homes. This reflects lack of character on a man’s part, but it may also be a result of the way his wife relates to him. Wagner nails it when she says, “Your husband may never admit this to you, but he may fear you. He may be terrified to make decisions because he feels he never does anything right, is unable to please you, or could never measure up to your expectations. Or he may be intimidated by your fierceness or passion.”

The Fierce Woman can be a living inspiration but her ferocity can also morph into her husband’s worst nightmare. He may respond to her fierceness by shutting down, running, responding in harsh anger, or passively retreating to his own silent world. Rather than experiencing joy and companionship, the couple caught in this miserable cycle relate to each other more like alienated roommates than passionate lovers and friends.

She is not saying that every wimpy man is a wimp because of his wife. Neither is she saying that all of a man’s problems are really his wife’s. Not at all. She is simply saying that many women misuse what God has given them. Their greatest strength may be their greatest weakness.

There is hope, but the hope is not for women to become weak and wimpy.

The good news is that this destructive cycle can be reversed. But a strong woman doesn’t need to take on a wimpy persona or undergo a personality transplant in order to be the ideal wife. As a Fierce Woman, you can develop a fresh and intimate relationship with your husband. In fact, God desires for your fierceness to play an integral role in His plan for your marriage.

This book is about the beauty of fierceness, about women who use their strength to honor the Lord by honoring their husbands. “When you’re told the hurdle is higher than you can jump, fierceness is what gets your blood going and takes you flying over the top. It’s the passion that motivates you to leave the cozy comfort of safety for the dangerous adventure of the unknown. It’s that element of determination that holds you in place when weak soldiers flee. It’s loyalty and doing what’s right; brilliant intensity and going the long haul. Fierceness is fervent faith and lonely stands; solitary boldness and trying one more time.”

Men are drawn to this kind of fierceness because it reflects godly character. The purpose of Wagner’s book is to identify that fierceness, to celebrate it, and to direct it toward the best and highest ends. Used wrongly it can be so destructive, but used well it can be an incredible blessing.

Fierce Women is the kind of book a feminist will hate because it affirms God-ordained differences between men and women and because it pushes women to live for the good of others, to esteem others higher than themselves. It affirms a woman’s strength, but shows the biblical way to use that strength is to direct it in love toward others. It’s a book I highly recommend.