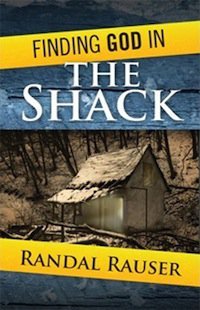 This review is a few weeks overdue. It was almost a month ago that I reviewed Roger Olson’s Finding God in The Shack and at that time I had hoped to review Randal Rauser’s book of the same title within a week. Life being what it is and how it is, the deadline slipped. Today I am attempting to make amends.

And so we come to Finding God in the Shack (II). This book comes from the pen of Randal Rauser, Associate Professor of Historical Theology at Taylor Seminary in Edmonton. As with Olson’s book of the same title, the publisher ensures the reader is aware that it is a theologian who is offering his professional evaluation of The Shack: “Aware both of the excitement and uncertainty generated by The Shack, theologian Randal Rauser takes the reader on a fascinating journey through the pages of the story. In successive chapters he explores many of the book’s complex and controversial issues. Thus he explains why God the Father is revealed as an African American woman, he defends the book’s theology of the Trinity against charges of heresy, and he considers its provocative denial of a Trinitarian hierarchy.”

Rauser begins his book by explaining why it is appropriate to allow a theologian into The Shack and then explains why he is particularly fond of this novel. In the subsequent three chapters he examines issues that have been of particular concern to readers of The Shack: its depiction of God, its portrayal of the Trinity and its view of authority. While in many cases he does offer firm and biblical views on theology, he also shows a proclivity to asking questions he does not answer. For example, he looks at the female imagery used for God in The Shack and asks, “Is it ever appropriate to think of God as Mother or to pray ‘Our Mother, who art in heaven…?'” He does not answer, saying only that The Shack offers no settled position and that “if we become too committed to one or another image of God, it can become an idol for ourselves and a stumbling block for others.” This may be true as far as it goes, but surely a theologian should offer answers to his own questions. Other strange statements abound such as this one in the chapter looking at hierarchy: “As for The Shack, it may be that the appropriateness of the book’s depiction of God depends on who reads the book and what prior conception of deity they bring to it.”

He dedicates the final three chapters to the most prominent of The Shack’s themes–that of suffering and evil. Rauser understands, rightly I think, that the majority of The Shack’s detractors are Calvinists and hence he sets much of this chapter against Calvinists and Calvinism. He first summarizes what he understands to be the tenets of Calvinism and then proceeds to refute them. Sadly, as I have documented elsewhere, he offers a completely fabricated portrayal of Calvinism. It is inaccurate, offensive and almost libelous. In the meta for that earlier blog post I interacted with Rauser and asked him to point to one credible source for some of the most outrageous of the statements he made. To this point he has not done so. Nor do I think he will be able to. No Calvinist I know of believes what Rauser claims to be true of Calvinists. So this whole section on suffering is tainted, at least to someone who has a realistic understanding of Calvinism. Even while Rauser does offer some valuable wisdom, it is overshadowed by his scorn for Calvinism and has irrational reaction to it.

The book’s strongest chapter may be “Finding Hope in God’s Pain.” Here Rauser shows that the doctrine of the atonement is missing from The Shack, explaining what this doctrine is and how it is critical to the Christian faith. As he does so he speaks of propitiation, of sacrifice, of reconciliation, and ultimately of the gospel. Ironically, he quotes John Calvin to support his points. Where the gospel was largely lacking from The Shack, it was refreshing to read it here.

Perhaps my greatest concern with this book is that it is sometimes difficult to separate the author’s understanding of theology from his description of the theology presented in The Shack. At times I was uncertain whether he was agreeing with The Shack or merely summarizing his understanding of what it teaches. When we combine this critique with Rauser’s habit of asking questions he does not intend to answer, we find a book that does not offer as many answers as we might like. Why should the publisher play up the fact that this book is written by a theologian if he will not use his expertise to answer the questions?

So I guess we are left with this: I would not recommend either Finding God in The Shack. Neither one deals consistently and biblically with the theology of The Shack. If you absolutely must read one or the other, go with this one; it is a better effort than Olson’s and, at the very least, it shares the gospel message. But with so many books available to us today, I have to think your time could be better spent elsewhere.