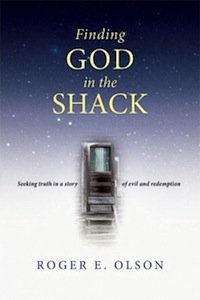 I mark this review as Finding God in The Shack I because this month will see the release of two books by two authors but with only one title between them. Both books look to the overwhelming success of William Young’s The Shack, evaluate it, and seek to answer its critics. As one of those critics, and as one whose review has been read hundreds of thousands of times, I have some interest in the subject matter. This is especially so when both books claim to lay to rest some of the criticisms lodged against it.

First out of the gate is Roger’s Olson’s effort. Olson is a theologian (professor of theology at George W. Truett Theological Seminary of Baylor University) and in this book he purportedly “views The Shack with a theologian’s eye and finds much sound truth. He delves into many of the significant issues raised by the book such as forgiving those who have done us great evil, how God acts in the world, how God is three persons in one and what difference this makes to us. While he offers his own criticisms of the book, he largely finds the truth about God in The Shack.” Of course it is strange that in a book offering a theologian’s eye he would say “Why do I think The Shack has something important to teach? The book rings true to my own experience.” This seems to directly contradict the publisher’s claim that he looks at this book as a theologian. Nevertheless, a few pages later he says that the book “communicates great truths about God that are both biblical and resonate with experience.” Throughout the book he dedicates some effort to both.

Within his book, Olson asks this perceptive question. “I wonder how many folks who say they really love The Shack even stopped to think about what they read there?” I have wondered the same. I have enjoyed interacting with many people, hundreds even, who have done that. But I fear that hundreds of thousands more have put little thought into what they have read. Olson stops to think about The Shack and points out some of what is good and some of what is bad. Unfortunately his own theology is suspect in some areas, leading this book to advocate some seriously flawed doctrine.

Olson is Arminian in his theology (and is even author of a book titled Arminian Theology) and his understanding of free will will not sit well with those of a more Calvinistic persuasion. His understanding of free will impacts a good deal of related theology, especially as it relates to suffering and God’s sovereignty. For example, it dictates how he understands suffering in this world and leads him at times dangerously close to open theism. “God has the power to stop evil and suffering, but that would require taking back the gift of free will. For now, at least, God is honoring our demand for independence, and is using his power of suffering love and mercy to bring us back to himself. If he unilaterally stopped all evil, people would not be free.” And again, “In every tragic situation of innocent suffering God does all that he can do to prevent and alleviate it. Is God powerless? No. … Rather, God limits himself for the sake of human freedom. And God abides by rules about how often and when he can intervene.” He then tells of his indebtedness to Gregory Boyd’s book Is God to Blame?. At one point he suggests that while God is in charge of the world, he must not be in control of it. He also says, “what if, instead of knowing with absolute certainty, God limited himself to knowing all possible outcomes and was prepared to deal with whichever ones became actual? It’s just something to think about.” He is the theologian. Shouldn’t he tell us instead of just offering loaded suggestions?

Allow me to point to a few other areas in which Olson defends unbiblical theology.

First, Olson says rightly that The Shack gets the Trinity wrong in some important areas, and especially in areas related to the atonement (or, at least, in a traditional penal substitutionary understanding of the atonement, something he does not necessarily adhere to). But he follows this by saying “I consider these relatively minor flaws in what is otherwise a superb and moving portrayal of the character of God.” This makes me wonder what could possibly qualify as a major flaw.

Second, he is a little bit ambiguous on the subject of hell. Where William Young seems to almost go so far as denying hell (and where at the least he describes it as something less than divine punishment for sin), Olson offers some criticism for this without affirming the biblical truth. He does say, “I wish William Young had said more about hell. It’s not necessarily a place of literal fire and physical torment. But it is a biblical place.” But he does not offer a biblical alternative.

Third, Olson defends inclusivism. “[C.S.] Lewis and the author of The Shack, together with many Catholic and Protestant thinkers, are inclusivists with regard to non-Christians. Without using the term ‘anonymous Christians,’ they are saying the same thing: that many people who are not organizationally Christians are Jesus followers because they love him and do his works. I agree with the author of The Shack on this.” He declares that Jesus may accept people who are supposedly serving Christ even while not knowing who he is.

Also curious are these sentences. “A major theme of The Shack is trust. God wants our trust, and that will lead to everything else. Theologians call this ‘justification by faith alone.'” Though I can understand what he is getting at here, I do not know of any theologian who would define justification by faith alone in terms even approximating these.

In the book’s closing pages Olson declares that, when it comes to what it teaches, The Shack is 90 percent right on. And this may be right if we are discussing mere quantity. But when we weigh the ninety percent that Young gets right with the ten percent that he gets wrong, we see that this leaves him wrong on a great deal of very important theology. These are no minor details. He is wrong on the atonement, the Trinity and God’s sovereignty over what he has created to name just three. So yes, there is a good deal of value in the book. But there is also too much that touches on theology that is just too important to overlook.

Olson concludes by suggesting that anyone who reads The Shack should do so with an open Bible and in light of Paul’s admonition in 1 Thessalonians 5:21 that we “test everything.” Applying this same exhortation to Olson’s book I think we will have to conclude that it falls short itself. At one point Olson says this about William Young: “I choose to think he’s more biblically and theologically correct than that.” And perhaps this is the downfall of Olson’s book. Sometimes he deals well with the poor theology of The Shack. Yet all the while he does so with the underlying belief that Young’s theology is more orthodox than the evidence seems to indicate. Olson’s presuppositions may just keep him from seeing what is all too obvious: The Shack is just plain wrong in some very fundamental areas.

The surprising thing about Olson’s take on The Shack is not that he finds both good and bad and not even that he finds more good than bad. What is surprising is that he regards as minor errors in theology that is at the heart of the Christian faith and that he shares so much poor theology along with it. As the publisher promises, Olson does cast a theologian’s eye on The Shack and as such offers some good reflections, both positive and negative. While his overall assessment of the book is that it offers more truth than error, the discerning reader will find good cause to remain concerned. Ultimately I think Olson inadvertently does a wrecking job on his own thesis–that The Shack is predominantly good. By the time he has finished sharing all that is wrong with the book, many readers will no doubt scratch their heads and wonder just how good the good can be in light of all the bad.