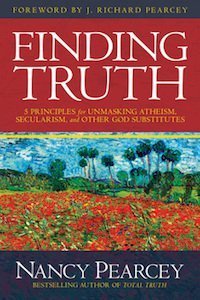 Nancy Pearcey’s bestselling and award-winning book Total Truth made quite a mark on my life. It was, to my memory, the first book I had ever read on worldview, and its explanation of the way our world divides the sacred and the secular has not only stuck with me, but has helped me better understand and explain the culture around me. Though Pearcey has written another book between then and now, I consider her new work, Finding Truth, the true sequel to Total Truth.

In Finding Truth, Pearcey offers 5 principles meant to unmask our culture’s endless worldview alternatives to Christianity—secularism, atheism, and the like. There are all kinds of books that make a similar promise, but this one has a noteworthy difference: Pearcey looks to Romans 1 to find a kind of apologetics training manual for identifying and challenging any other worldview.

At the start of Paul’s letter to the church in Rome, he claims that all humanity has access to evidence for God’s existence, and then describes what happens when people refuse to acknowledge him. As people turn away from God, they suppress the truth that God makes known to them through creation and through human nature. People hide from God by creating idols, God substitutes. These are not merely idols of wood and stone, but also ideas, any idea that provides an alternate explanation for the meaning and purpose of life. Idols have consequences, and God gives up those who worship them to a debased mind, so that they become futile in their thinking and dishonorable in their behavior. While most explanations of this text dwell on behavior, Pearcey focuses on the mind, showing the ways in which the unbelieving mind is affected by sin so that an entire worldview becomes completely opposed to God.

In Romans 1 she finds five strategic principles that “provide a basic game plan for making sense of any worldview across the board—even the cutting edge ideas of our day—and then to craft a compelling positive case for Christianity.” Here is a brief explanation of each.

Principle 1. Identify the Idol. Every non-biblical worldview begins with some kind of a God substitute—an idol. If human beings will not worship the God who created them, they will still worship something—something that provides an alternate explanation of the world’s origins or that provides an understanding of the meaning of life.

Principle 2. Identify the Idol’s Reductionism. Once we identify the idol, we need to look for its reductionism, the way in which it leads to a low view of human life. When one part of the creation is deified or idolized, every other part will necessarily be denigrated. Why? Because one part is always far too small to explain the whole thing. Reductionism is always dehumanizing.

Principle 3. Test the Worldview: Does It Contradict What We Know About the World? The third step is to test the worldview against the facts of experience, which is to say, the truths of general revelation. Though people will continue to suppress the evidence of God’s existence, what God has created continues to challenge them, because physical nature and human nature constantly provide evidence of a Creator. Therefore every idolatrous worldview will fail to fit the evidence and will, instead, contradict the facts of general revelation.

Principle 4. Test the Idol: Does it Contradict Itself? Every reductionistic worldview is, on some level, self-defeating. It commits suicide by reducing reason to something less than what is reasonable. We need to look for the way in which it contradicts itself and collapses internally. (An example is the relativistic claim that there is no universal truth even though this statement is, itself, meant to be a universal truth.)

Principle 5. Replace the Idol: Make the Case for Christianity. By focusing on the points where reductionistic worldviews fail, we can offer a better and more compelling alternative. We can do this by finding those inevitable places where other worldviews borrow from the Christian worldview and expose themselves to critique.

Finding Truth has many commendable strengths. For one, Pearcey shows again and again just how far people will go to suppress the knowledge of God. They will go to any length to deny what is right in front of their noses and—even closer—right within their own hearts and minds. She shows this in a broad range of alternative religions and philosophies, pointing always to the consistency of the Christian faith.

While she shows that all other worldviews are insufficient and illogical, she does not discard them altogether. Instead, she shows how they do contain some genuine insights, and then shows how their best insights are inevitably and illogically stolen from the Christian worldview.

She also provides a compelling intellectual argument for the Christian faith. I appreciate what Gregory Koukl says in his endorsement: “This is one of those books that not only challenges the critics; it also gives a huge dose of confidence to the Christian who will catch himself walking away from its pages saying, ‘Gosh, this stuff really is true.’”

Pearcey promises that the principles she lays out will “provide you with the tools to recognize what’s right and wrong with any worldview—and then to craft a biblically informed perspective that is both true and humane.” She makes the promise and she delivers on it. Finding Truth is, all-in-all, a worthy successor to Total Truth.

Finding Truth is available at Amazon.