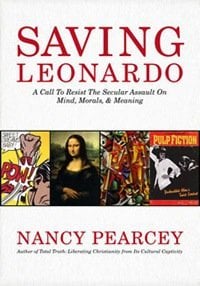 Buy from Amazon Buy from WTS Bookstore
Yesterday I finished up Nancy Pearcey’s new book Saving Leonardo. Nancy doesn’t write a lot of books, but when she does, they are worth reading. She’s a unique thinker and one who puts into words what for so many of us are just ideas flitting around the edges of our minds. This new book is just like that.

When I finished it up I began to write a review but found that I was having trouble distilling my thoughts. I did something I try not to do, at least until I’ve finished writing my own review–I went looking for what others are saying about it. As I did so, I came across a really good review written by David Steele (who blogs at veritas et lux). David was kind enough to give me permission to simply re-post his review. It nicely captures my own thoughts on Saving Leonardo!

Nancy Pearcey has done it again. Her book Total Truth captured the attention of thousands and helped equip a new generation of thinking Christians. While some consider the term “thinking Christian” somewhat of an oxymoron (think, “military intelligence,” or “jumbo shrimp”), nothing could be further from the truth. Indeed, clear thinking and warm-hearted devotion are crucial characteristics for anyone who professes faith in Christ. Anyone who rejects the notion of a “thinking Christian” should pause and consider the thought process generated in order to make the claim!

Pearcey’s newest masterpiece, Saving Leonardo is, as the subtitle suggests, a call to resist the secular assault on mind, morals, and meaning. The primary assertion: “The only hope lies in a worldview that is rationally defensible, life affirming, and rooted in creation itself.”

The Threat of Global Secularism

In part one, author clearly articulates the necessity of a Christ-informed worldview. She challenges readers: “Do you have the tools to detect the ideas competing for your allegiance in movies, school textbooks, news broadcasts, and even Saturday morning cartoons?”

Pearcey reveals the goal of the book at the outset: “The goal of this book is to equip you to detect, decipher, and defeat the monolithic secularism that is spreading rapidly and imposing its values on your family and hometown.” As such, she calls Christians to abandon the “fortress mentality” that has been prominent for years; a mentality that gravitates to isolation from the world. Rather, Christ followers ought to become familiar with their audience and engage with them on a worldview level. “The first step,” writes Pearcey, “is to identify and counter the key strategies uses to advance the global secular worldview.”

Next, Christians must understand how secularism views the nature of truth. Pearcey demonstrates how empiricism has spawned what we know today as the fact/value split. This divided concept of truth is the most important feature of a secular approach to epistemology and is “the key to unlocking the history of the Western mind.” The author is quick to explain the biblical concept of truth; a notion that was the theme of Total Truth: “Because all things were created by a single divine mind, all truth forms a single, coherent, mutually consistent system. Truth is unified and universal.”

The fact/value dichotomy finds values in the so-called upper story (a scheme developed by Francis Schaeffer). These values are private, subjective, and relative. Values include religious claims and personal preferences. Fact are found in the lower story. These facts are public, objective and universal. The author gives numerous examples of how the fact/value dichotomy is diametrically opposed to the biblical view of truth. For instance:

Clearly, values posed in the fact/value dichotomy are never considered to be true. Rather they are expressions of an opinionated individual; i.e. a so-called “bigoted Christian.”

Part two uncovers two paths to secularism, namely, the Enlightenment and Romantic movements respectively. The Enlightenment (or Analytic Tradition) is fixated on reason and relies on the scientific method. Immanuel Kant plays a central role here with his nature/freedom dichotomy. Various worldviews have been spawned as a result of Enlightenment thought including empiricism, rationalism, Darwinism, logical positivism, linguistic analysis, utilitarianism, and materialism.

The Romantic stream (or Continental Tradition) relies on story and is fascinated by myth and imagination. Again, various worldviews have resulted including idealism, Marxism, deconstruction, phenomenology, existentialism, pantheism, and postmodernism. Both streams are reductionistic and the author is careful to bring this point home repeatedly.

Pearcey dissects both streams carefully and skillfully. Her depth and insight is very helpful and encouraging. The final two chapters are the most helpful and practical. The author prompts readers to give up the typical Christian fortress mentality: “Christians must go beyond criticizing the degradation of American culture, roll up their sleeves, and get to work on positive solutions. The only way to drive out bad culture is with good culture.”

The author reminds Christian parents that they cannot protect their children from unbiblical worldviews. But they can “help them develop resistance skills, by giving them the tools to recognize false ideas and counter them with a solid grasp of biblical concepts … Christians are responsible for evaluating everything against the plumb line of Scriptural truth.”

Nancy Pearcey is picking up where Francis Scheaffer left off. And she gives Schaeffer the last word on the subject: “One of the greatest injustice we do our young people is to ask them to be conservative. Christianity is not conservative, but revolutionary … We must teach the young to be revolutionaries, revolutionaries against the status quo.”

Saving Leonardo will likely win the Gold Medallion award in 2010. It’s that good!

So there you have it. This is yet another fantastic book from Nancy Pearcey. It’s one of those books that will require a lot of thought and a good deal of concentration. But it’s one that will reward the effort.