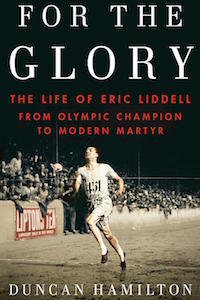 There are some historical figures who stand out because of their amazing accomplishments and there are some who stand out because of the depth of their character. There are a select few who stand out for both accomplishment and character, and prominent among them is the Flying Scotsman, Eric Liddell. Liddell accomplished great feats of athleticism, then left behind fame and fortune to pursue a much higher calling in the dangerous mission field of China. He did it all with the highest character, living a life that was very nearly unblemished before it came to an untimely end in a Japanese prison camp. His story has been told through books, movies, and documentaries, and it has just been told anew through Duncan Hamilton’s For the Glory: Eric Liddell’s Journey from Olympic Champion to Modern Martyr, easily my new favorite. Hamilton has woven together a brilliant, beautiful, stirring look at an incredible man.

As far as I can tell, Hamilton does not profess to be a Christian and this gives him a different perspective on Liddell than most (or all) of his prior biographers. Many of Hamilton’s other works focus on sports so perhaps it was Liddell the athlete that first drew him. Yet as he focused on the athlete he necessarily had to focus on his character and the faith that generated it. His work, then, tells far less of Liddell’s inner man and far more of his words, his works, and the way others encountered and perceived him. Hamilton is especially keen to liberate Liddell from the way most of us know him—the film Chariots of Fire. Though that film was plenty good, it left those who viewed it with a skewed perspective of its hero. “Most of us are smart enough to realize that filmmakers who pick history as their subject tinker with the veracity of it. But our perception of an event or of a person still becomes inextricably bound to the image presented to us. So it is with Chariots of Fire. So it is with Liddell. We’ve ceased to see him. We see instead the actor Ian Charleson, who played him so compassionately.” Hamilton remedies this by giving us Liddell as he was. And that is something special.

There were a number of elements that made this biography stand out to me, the first of which was Hamilton’s telling of the 1924 Olympics and especially of Liddell’s gold medal triumph. He tells this in such a way that you can almost see it, you can almost feel the electricity of the crowd, you can almost hear them roar. It’s brilliant. And yet he is sure to circle back at the end of the book, to Liddell’s final race. Liddell was suffering deeply in this time, yet wanted to do something fun for the people who were with him in that Japanese prison camp. He ran one last race which, because of his failing body, he could not win. “Seen in the terrible light of what awaited him, this race is Liddell’s best and unquestionably his bravest. Where his initial speed came from, and how he managed to sustain it for so long, is unfathomable. The courage he summoned to run at all is extraordinary, a testament to his will. Liddell never competed again, and those privileged to see his farewell to athletics appreciated only retrospectively the absolute miracle he performed in front of them. The dying man had lost, but to them he was still the champion.”

Another element that stood out was the depth of the criticism that faced Liddell when he refused to complete his race on Sunday. The press maligned him and friends turned on him. He was regarded as daft and unpatriotic. Yet he let his character speak for itself, even as the games began.

No one was further removed from the bright young thing and the anything-goes bohemian than Eric Liddell. And an easy, but horribly flawed, assumption was made about him because of his character. His expression of religious faith was perceived as a sign of innate weakness. Because of his decision not to compete on a Sunday, Liddell was dismissed as a pacifist in top competition—a man with a soft center. The notion was ludicrous. Once, pointedly asked how he won races so often against the odds, Liddell answered: “I don’t like to be beaten.” On the track Liddell knew where to find the opposition’s jugular—and he also knew how to rip it out. Paris was a test of temperament for Liddell long before it became a test of speed, requiring qualities no one could coach: fortitude, integrity, forgiveness, stoicism, will. You either possessed these or you didn’t.

He did in great measure.

And then there is the account of what Liddell did with his fame. “There have always been personalities who hide only where the press and the photographers are certain to find them and plunge into fame, letting its riptide carry them away. Liddell wasn’t one of them. Fame was only worthwhile because it made him much more likely to be listened to. He wasn’t one of those Bible-thumping preachers who, good book in tow, had to wander peripatetically in search of audiences. The audiences came to him. The problem was finding meeting halls big enough to accommodate them.” He did not seek fame, it sought him. And he used it to tell others about Jesus. But then he also left it behind to serve God in obscurity and great danger so he could tell even more people about Jesus.

And then there is the account of Liddell’s death and the mark it left not only on his family but on the whole community in that prison camp. Hamilton portrays Liddell as living an almost unbelievably good life that was followed by an agonizingly tragic death. His death came after much physical weakening and suffering but also much mental anguish. Not only was he separated from those he loved most, but he fell into a deep depression at least in part because doctors had told him his physical symptoms were a sign of mental weakness, that he was going through a nervous breakdown. He “felt inexplicably guilty about it [telling friends].” He said, “There is just one thing that troubles me … I ought to have been able to cast it all on the Lord and not have broken down under it.” He died without knowing the truth, that he had a malignant brain tumor that was destroying him from within. Still, he died as he lived, professing his love for God and his dependence upon him. His last words were fitting: “It’s complete surrender.”

Hamilton’s telling of Liddell’s life is uniformly positive, perhaps because he simply couldn’t find any major blemishes. It’s almost like he finds himself shocked at the sheer goodness of his subject. His telling occasionally reflects a little bit of antagonism toward certain Christian organizations and includes a couple of unfortunate word choices and cultural references. But these are only minor quibbles with what is otherwise a brilliant book—one of 2016’s must-read biographies.

I will let Hamilton speak once more as he reflects on the life he spent so much time studying. “Valorous lives like his—which must be calculated in terms of value rather than length—encourage us to make our own lives better somehow. In his case that’s because everything he did was selfless, each kind act bespoke for someone else’s benefit. He believed entirely that those to whom ‘much is given’ are obliged to give ‘much in return’—and should do so without complaining about it. In adhering to this, he never demanded grand happiness or great comfort for himself. He grasped only for the things that mattered to him: worthwhile work and the care of his family.” May he inspire us to live such simple, meaningful, surrendered lives.