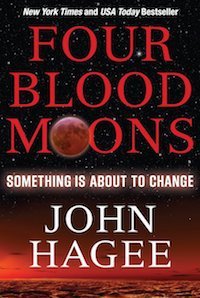 I most often read Christian books that appear to offer the opportunity to grow in knowledge and obedience to the Lord, but occasionally I see one soaring up the bestseller lists or otherwise making an impact and decide to read it just to see what the fuss is all about. Such was the case with John Hagee’s Four Blood Moons. The book has lingered near the top of the Amazon charts for a few weeks now and has received nearly one thousand five-star reviews. For those reasons I decided I would give it a read.

We have just experienced the first of a series of four lunar eclipses. Acccording to NASA, “The action starts [started] on April 15th when the full Moon passes through the amber shadow of Earth, producing a midnight eclipse visible across North America. So begins a lunar eclipse tetrad—a series of 4 consecutive total eclipses occurring at approximately six month intervals.  The total eclipse of April 15, 2014, will be followed by another on Oct. 8, 2014, and another on April 4, 2015, and another on Sept. 28 2015.” These four consecutive total lunar eclipses will each result in the moon appearing red for the duration of the eclipse. This phenomenon is known as a blood red moon.

Well, if you are deeply involved in biblical prophecy, this is the kind of thing you will find difficult to ignore. After all, Joel 2:31 says, “The sun shall be turned to darkness, and the moon to blood, before the great and awesome day of the LORD comes.” Hagee believes that “God uses the sun, moon, and stars as signals to mankind. He uses the heavens as His divine billboard announcing coming events.” He says:

The sun, moon, and stars are unmistakably connected to Israel and biblical prophecy—and that connection inspired this book. God will use them to light up the heavens with an urgent, top-priority message for all mankind. What is God saying to us? How does the past hold the secret to the future? What is about to happen on planet earth? Everything is about to change … forever! Keep reading, because this message from God is so urgent to Him that He sovereignly arranged the sun and the moon to perfectly align themselves to create a Tetrad—four consecutive blood moons.

It turns out that over the past five hundred years, blood red moons have fallen on the first day of Passover three separate times. “Tetrads linked to Jewish history have happened only three times in more than five hundred years. And it’s about to happen for a fourth time.” By doing some historical research, Hagee has determined that each of those moons have happened at a pivotal moment in Jewish history: 1492 (the expulsion of the Jews from Spain), 1949 (the U.N.’s recognition of Israel) and 1967 (the Six-Day War).

Now it’s important to understand that Hagee believes the Jews were and still are God’s chosen people and that all God’s promises and covenants with the Jewish people are still in effect today. “The Jewish people are still the apple of God’s eye. They are still cherished and chosen of God. And they are still the people of covenant—a covenant God has pledged to keep forever.” He also believes that God has a special relationship with the United States of America, since, as the Jews were expelled from Spain in and around 1492, they were soon welcomed to America. “The mantle of prosperity was lifted from Spain and placed upon the shoulders of an infant nation that would become the United States of America.” America has been given the special privilege of protecting God’s people and, therefore, America needs to be especially vigilant about the sign of the four blood moons.

I suppose we have already read this book, or others like it, a thousand times. It is, of course, based on endless speculation (and, as many have pointed out, another person’s research). What do we do with a book like Four Blood Moons? I say we ignore it. Let me give four reasons.

Hagee misuses Scripture. Hagee routinely misuses Scripture as he draws out his prophecies. He appears to read the Bible literally or metaphorically entirely on the basis of whether doing so suits his purposes. He approaches the Bible with his mind made up and then goes looking for proof of his assertion. Not surprisingly, he finds it wherever he needs to find it.

Hagee reads history conveniently. Four Blood Moons reminds me of the infamous book The Bible Code in its ability to predict the past and complete inability to say anything meaningful about the future. Hagee picks and chooses the historical events he will pronounce as significant while simply ignoring the ones that do not fit his point. He does not say, for example, that three of the four eclipses in this tetrad will not even be visible from Jerusalem, rather an odd fact if they are meant as a sign to and about Jerusalem. (An excellent article at AiG explains more about the lunar calendar and the occurrence of eclipses.)

Hagee writes as an American for Americans. It is always strange to read books like this from my Canadian perspective. Hagee believes America is a special nation in God’s eyes. But why is this true of America and not Canada, or Switzerland, or Vietnam? Why is it America that needs to heed these warnings and not any other nation? Though the gospel is for all nations, tribes and tongues, this is a book by and for Americans.

Hagee is not clear on the Messiah and the Jewish people. Hagee has a great admiration—envy even—for the Jewish people. His admiration is so pronounced that he appears to deny their need of salvation through faith in Jesus Christ. The most cruel and false love of all would be to assure Jews that they are saved by virtue of their Christ-less faith. Yet Hagee seems to do just this, extolling Jewish faith and practice and refusing every opportunity to call Jewish people to turn to the Messiah who has already come. If he actually does believe they ought to turn to Christ, he does not make this at all clear.

Of course we already know something will happen in the future, though we do not know if it is near or far. The Lord will return! But God, in his wisdom, has chosen not to reveal his timing to us, and has warned against predicting it. Such speculation based on the moon and stars is little more than Christian astrology. We do far better to just enjoy the blood red moons as another of God’s displays of beauty, and not as a vague prediction of coming events.