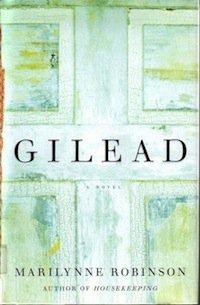 Buy from Amazon
I had tried reading Marilynne Robinson’s Gilead at least three or four times, but without success, which is to say, without completing it. I would read twenty pages, or even eighty, and eventually put the book aside and forget to return to it. Gilead is wonderfully written, so it is not that I was trying to slog through dense or poorly-written text. Far from it! It is for good reason that this book received the 2005 Pulitzer Prize for fiction. For some reason I just couldn’t get into it far enough to take it to completion.

A few months ago I came to the realization that some books are better heard than read. I don’t know why this came as a shock to me, but for some reason it did. Now that I have discovered the beauty of a well-read audio book, I wanted to revisit Gilead to see if I would enjoy listening to it. Earlier this week, before I set out on a nine-hour drive from Toronto to Louisville, I loaded up the book on my iPhone and listened to it all the way from the north to the south. It was sublime.

Gilead is a novel in the form of a long letter, a memoir of sorts, written by John Ames and addressed to his young son. Ames, a pastor in small-town Iowa, married late in life, was blessed with a son of his old age, and in his declining years shares his “begats.” He wants to give his son a record of his own life and a knowledge of family history. But as Ames writes this memoir, adding to it day-by-day, Jack Ames Boughton, a character from his past enters his life and he finds himself in a kind of spiritual crisis.

Let me borrow a paragraph from Wikipedia that aptly summarizes the heart of the book:

Although there is action in the story, its mainspring lies in Ames’ theological struggles on a whole series of fronts: with his grandfather’s engagement in the Civil War, with his own loneliness through much of his life, with his brother’s clear and his father’s apparent loss of belief, with his father’s desertion of the town, with the hardships of people’s lives, and above all with his feelings of hostility and jealousy towards young Boughton, whom he knows at some level he has to forgive. Ames’ struggles are illustrated by numerous quotations from the Bible, from theologians (especially Calvin’s Institutes of the Christian Religion) and from philosophers, especially the atheist Feuerbach, whom Ames greatly respects.

It is strange and unexpected–and delightful, of course–to find so much theological content in a novel that achieved such widespread acclaim and popularity. Ames does not wrestle with minor matters here. Rather, he wrestles with profound and important truths, looking to the great theologians of days past to reflect on the nature of forgiveness, the sin of envy, and so much more. This character of John Ames is wonderfully-crafted in all his confidences and questionings, all his strengths and weaknesses. So too is young Jack Boughton, who serves as something of a foil by forcing Ames to work out his theology in real life.

All of this comes from the pen of a skilled author, who is able to bring a liveliness to the text, who is able to use the English language as powerfully as any contemporary author I’ve read. Gilead really does exemplify writing at its best–an intriguing story, fascinating characters, the proclamation of truth, and beautiful writing. I just had to listen to it to fully appreciate it.