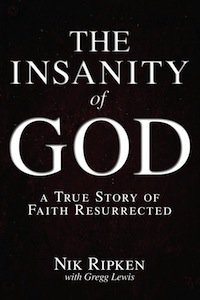 There are too many Christians who doubt that the Lord still does miracles today. He does. I’ve seen them. I’ve seen more miracles than I can count. God still does the unimaginable and the unexpected, and just as in days of old, he does it all to testify to his own glory.

I found myself thinking about miracles as I read The Insanity of God, a new book by Nik Ripken–a book that carries a foreword by David Platt and endorsements by a who’s who of Southern Baptist notables: Akin, Page, Rainer, Stetzer, Hunt. Nik Ripken is a pseudonym for a former missionary from the hills of Kentucky. Having become a believer as a young adult, he felt called to the mission field, eventually settling in Nairobi. From there he founded a small aid organization and extended help into war-torn Somalia. As he visited that country, and as he saw the desperate poverty, the famine and death, he realized that his Westernized, Bible-Belt faith held few answers. It had not adequately prepared him. When he suddenly and unexpectedly lost his teenaged son, he experienced a genuine crisis of faith.

In this crisis he found himself wondering how believers survive and thrive under persecution. He decided to find out, traveling to the former USSR, to China, to the Middle East and to many other countries where to profess faith in Christ is to put your life in danger. Much of the book is spent describing what Christians have endured for Christ and how the Lord sustained them through the most difficult circumstances. He found quickly that “The stronger the persecution, the more significant the spiritual vitality of the believers.” He heard story after story of the Lord showing extraordinary grace in extraordinary circumstances. “It was as if the pages of the Bible had opened and the saints of old were once again walking the earth. And I had suddenly found myself among them.”

A theme among persecuted believers is the commonness of the miraculous. He heard Muslims describing visions where they were told where to go to hear the gospel; he heard of the dead being raised to life. He confesses “I had always seen God’s Word, especially the Old Testament, as a holy history book. For me, it was an ancient record of what God had done in the past.” But “In light of all I had heard, there was no way to avoid the conclusion: God, evidently, was doing today everything that He had done in the Bible! The evidence was compelling. At least among people who were faithfully following Him in the world’s toughest places, God was still doing what He had done from the beginning.”

Anyone who reads accounts of the Lord’s work in lands where the gospel is unknown will have to consider similar stories. I have heard many, many accounts of visions, where a person is told where to go and whom to speak to in order to hear the gospel. They are not converted in a vision, but are pointed toward the gospel. We hear stories like those made so popular by Brother Andrew in God’s Smuggler, of God making the seeing blind.

What Ripken comes to believe is that persecution unlocks God’s power in a purer, sweeter way. He comes to idealize the faith of the believers in China and the former USSR, drawing a clear line between the way we experience God in the non-persecuted Western world and the way Christians experience God in lands were persecution is rampant. He comes very close to romanticizing persecution, to wishing it upon all of us. “Evidently, God is still very much at work in His world,” he writes. “And evidently, He still speaks to those who walk with Him. … I hungered for that kind of intimate relationship with God.”

What we discovered–through God’s grace and with the help of hundreds of faithful people–wasn’t so much a strategy, a method, or a plan. Rather, it was a Person. We found Jesus–and we found that Jesus is very much alive and well in the twenty-first century. Jesus is revealed in the lives and words and resurrection faith of believers in persecution.

These believers don’t just live for Jesus, they live with Jesus every day.

And at the end of it all, I find myself thinking about miracles. I have no doubt that the Lord is able to work in miraculous ways today, and that he does work in miraculous ways. I pray for miracles nearly every day. This morning Aileen and I prayed for a miracle in the lives of our girls. We trust that in due time we will see one. We trust that in due time he will perform in their lives the miracle he performed in each of ours–that he will take their dead hearts, hearts that are committed to sin and self, and make them alive. There is no greater miracle than this. There is no better miracle than this.

If the Lord chooses to revive a heart that has stopped beating and to restore a brain that has stopped functioning, that is a testament to his grace. If he chooses to heal cancer through anointing with oil and prayer, that is a beautiful display of his power. But these miracles pale in comparison to what he does when he brings the spiritually dead to life, when he takes a rebel and transforms him in the deepest way possible. This is the one miracle that, unmistakably, gives glory to God alone.