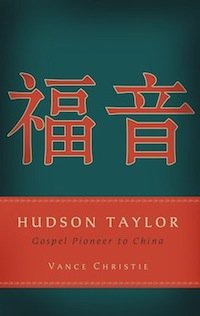 Buy from Amazon Buy from WTS Bookstore
Dear God, if you should give us a son, grant that he may work for you in China.” That was the prayer of James and Amelia Taylor as they consecrated their first child to the Lord, months before he was even born. That child entered the world on May 21, 1832. His parents named him James Hudson Taylor, but called him by his middle name. Hudson Taylor would, indeed, grow up to work for the Lord in China. Not only that, but he would be used mightily by God and he would transform the way missionaries worked among the people they ministered to. In his own way he would change the world.

Taylor became a Christian as a teen and was immediately drawn to China, deciding that the Lord was calling him to serve as a missionary. He spent several years studying medicine and the Mandarin language before departing on the long and perilous journey to the Far East. Very quickly he made the radical decision to adopt Chinese dress and hairstyles, understanding that such things could increase his credibility in the eyes of those he loved (even if they would make him a laughing stock among his fellow missionaries). He went on to found China Inland Mission, an organization that continues to exist today (though under a new name). The story of his life deserves a lot more attention than I could give it in just a few short paragraphs, so I will hold off and point you to Christianity Today’s brief biographical sketch.

Hudson Taylor is the subject of Vance Christie’s biography Hudson Taylor: Gospel Pioneer to China. I love missionary biographies, so I suppose I was predisposed to enjoy this book. Sure enough, I enjoyed it a lot. Christie is a talented biographer and in this book he works with a fascinating subject. In place of sharing the details of Taylor’s life, let me tell you a few of my takeaways from this biography, a few of the things I’ve had to ponder as I’ve been given just a glimpse into the life of a great man.

Called to Suffer. Hudson Taylor’s call to take the gospel to a foreign land was a call to suffer. And this man suffered very deeply, eventually burying his wife and four children on the mission field. I wrote about this a little bit more in an article from last week titled The Sweet Prattle. The call to serve as a missionary may have seemed glamorous to those who sponsored him and it may seem glamorous to us today, but in reality it was a call to suffer and to suffer deeply. Yet it is clear that this suffering was an important forming influence in his life; in many ways it made him the man he was. The Lord did not work in him apart from this suffering, but through it.

God’s Preparation. When God calls a man to serve him, he also prepares him for such service. Hudson Taylor invested a great deal of effort in his own preparation through learning languages and studying medicine. But the Holy Spirit also prepared him by granting him a great love for the Chinese people, by giving him great confidence in the gospel, and by granting him continued awakening and re-awakening. This man was equipped vocationally, but also spiritually.

God Provides. Taylor had an unshakeable belief in God’s ability and desire to provide for the work he had called him to. Where God had called, God would also equip. For that reason Taylor relied fully upon God, refusing to plead for money in the ways most missionaries did. He would even refuse to have a collection taken up after he spoke at a church, asking everyone to wait and pray about whether the Lord would have them support his work. He would rather people not give at all then have them give out of emotion.

Those are just 3 of the many lessons we can learn from this man’s life.

In Hudson Taylor: Gospel Pioneer to China, Vance Christie has given us a short but powerful account of the life of a man who was truly great in the Kingdom of God. If it has been too long since you have read the biography of a missionary, don’t miss out on the opportunity to be blessed by this one.