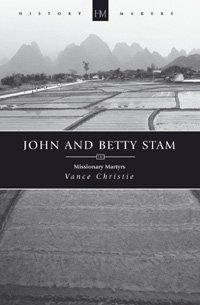 Buy from Amazon
“The fateful day began with deceptive normalcy at John and Betty Stam’s missionary residence in Tsingteh, China. Both the wood-burning stoves had been lit and were starting to heat up nicely, helping to lessen the chill that gripped the large old house that cold, early December morning. The Stams, along with the six Chinese who lived with them in the house, had already eaten breakfast.

“John hoped to study and get some correspondence done that morning. Betty was preparing to give their three-month old baby, Helen Priscilla, a bath, with some assistance from the amah Mei Tsong-fuh. The cook, Li Ming-chin, busied himself in the kitchen. His wife, mother, and two children similarly had begun their various daily activities.

“John and Betty had been in Tsingteh for just two weeks. They had come there under the auspices of the China Inland Mission to oversee the infant Christian work that had been established in the southern portion of Anhwei Province. There were very few Christians in the area, but the Stams were thrilled at the prospect of carrying out pioneer evangelistic work to help bring the Gospel to that needy part of China.”

So begins this biography of John and Betty Stam. In 1934 they were serving as missionaries in China, attempting to take the gospel message to unreached people. This was during the Chinese civil war and the Stams, along with their infant daughter, fell into the hands of Communist soldiers. After demanding and confiscating all of the Stams money, the soldiers took the couple prisoner. No sooner had they been dragged to prison that their baby began to cry and one of the soldiers suggesting killing the child lest she prove a hindrance. One of the prisoners who was just released asked why they would kill an innocent child, at which point the soldiers asked if he would be willing to die in her place. He expressed his willingness and he was struck down in front of the Stams.

Two days later, on the morning of December 8, 1934, John and Betty Stam were marched down the streets of Miaosheo to their deaths; the Communist soldiers wanted to make an example of the foreigners. A Chinese shopkeeper tried to persuade the soldiers to spare their lives but when the Communists searched this man’s home, it was found to contain a Bible and a hymn book. He, too, was marched to his death. John was forced to kneel and he was immediately beheaded. Betty and the shopkeeper were killed just moments later.

The deaths of John and Betty Stam electrified Christians around the world. The events of those days were widely publicized and many hundreds of people were inspired by their example to become missionaries and to support foreign missions. They spoke as loudly in death as they had in life.

In a short book of just about 200 pages, biographer Vance Christie tells the story of the lives of these two saints. Through their short lives they made an impact on the souls of many Chinese; through their deaths, suffered willingly for the cause of their Savior, they inspired many more. And even today, through books like this, they speak of the love they had for the One who had saved them. This is a very good missionary biography and one I enjoyed thoroughly.