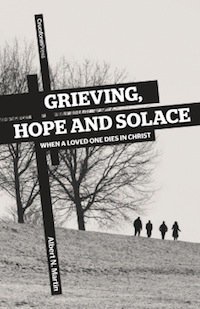 Buy from Amazon Buy from WTS Bookstore
Is it bad form to review a book I was involved in publishing? Perhaps so. Either way, I intend to do just that this morning. Many months ago I read a draft of Grieving, Hope, and Solace by Albert Martin, a book that was subsequently published by Cruciform Press (of which I am a co-founder). It wasn’t until this weekend that I thought to read the final product that had emerged after the editing process. I was so blessed by this little book that I just had to let you know about it.

Grieving, Hope, and Solace, as you probably surmised from the title, is a book about death. More particularly, it is a book about Christians and death. The book arose from a question Albert Martin grappled with following the death of  Marilyn, his wife of 48 years: “Although in many ways she had been taken from me incrementally during her battle with that wretched disease, the reality of the finality of death and the radical separation it effects swept over me. A few moments later, as I picked up her lifeless body, I found myself asking the question—What precisely has just happened to Marilyn? What has she experienced, and what is she experiencing now? Immediately I knew that if I would grieve as I ought, I had to be able to answer that question out of the Scriptures with absolute certainty.”

He knew that one whole chapter of his life had closed and that the Lord was now calling him to something new. Whatever that new thing was, he wanted to glorify God in it. “I felt very keenly the pressure of 1 Corinthians 10:31, ‘So, whether you eat or drink, or whatever you do [including grieving the loss of a godly wife], do all to the glory of God.'” Even in his grief he wanted to honor the Lord.

As a lifelong preacher he set himself to the task of preparing sermons that would search out and explain what the Bible teaches about death, about what his wife was experiencing and about how he was to react in his grief. The sermons formed the basis for this book, though I am glad to say that it does not read like a sermon series. It is, in fact, a wonderful little book that is packed full of hope and faith and gospel.

In those first days after Marilyn’s home-going, in my effort to handle the deep and crushing grief of my loss, I sought to frame into little maxims the various aspects of the biblical principles with which I wrestled. I would repeat these words to myself and they helped me greatly: Albert, think more of what Marilyn has gained than of what you have lost. I reminded myself again and again that she had gained that which is the burning desire of every true believer, even her complete and final release from all sin.

What sweet comfort there is in knowing that your loss, deep and crushing though it may be, pales in comparison to what has been gained by the person who died in Christ.

The second theme, which is the subject of five short chapters, is the focal points for biblical grieving. The big lesson for me in this section is laid out right away: “If truth will discipline even our grieving (Philippians 4:8), we must think more frequently of what Jesus has gained by this death than upon what we have lost. This is because, at the moment the soul of a Christian is separated from his or her body, Jesus Christ our Savior partially fulfills at least three things: the divine purpose for his own sacrifice, the desire of God’s heart, and holy joy.” That axiom, that we are to think more of what Jesus has gained than what we have lost, is transformative in grief. As deep as our loss is, just imagine the joy of Christ who now sees the person he died for made perfect.

In the rest of this part of the book Martin looks at what our loved one has gained, the shared hope of Christians, God’s purposes in us through this death, and what we have gained. The book closes with calls to encouragement in the gospel for the believer, and to turn to and believe the gospel for the unbeliever.

Grieving, Hope, and Solace was a great source of encouragement to me. It shares a wealth of wisdom gained in a lifetime of studying Scripture and put to the test in a deep loss. Let me leave you with an endorsement written by Joseph Pipa who, I think, says it really well:

Occasionally, serendipitously, we stumble upon a rare finding: turning the corner and being met by a glorious moonrise, discovering a painter or musician who touches us in the deepest recesses of our being, or reading a special book. This little book by Pastor Al Martin has been such an experience for me; written from profound biblical insight, tested by experience, Grieving, Hope and Solace: When a Loved One Dies in Christ is a delightful, edifying book, which you will want to read and re-read. Whether you are a pastor or counselor, one who is experiencing the pangs of grief, or a member of the church who wants to useful to others, you need to read this book. Of particular use to me, is how the book helps one to train his mind and emotions for the ‘rough door of death.’