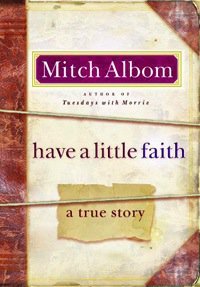 I did not ever read Tuesdays With Morrie, a book that has been described as “The bestselling memoir of all time.” I find that claim a little difficult to believe, but I suppose that the eleven million copies in print may prove it correct. From the pen of that same author, Mitch Albom, now comes Have a Little Faith, a book that shot straight to the top of the New York Times list of bestsellers within days of its release. Like its predecessor, this book is probably best-termed a memoir, a book that describes the impact of a pair of clergymen on the life of the author.

The book begins with a request. An eighty-two year-old rabbi from Albom’s hometown asks if he will deliver his eulogy. This leads Albom on a quest to learn enough about the man that he can deliver an effective eulogy. This in turn draws him back to a consideration of the Jewish faith he had walked away from as a young adult. At the same time, near his new home in Detroit, he encounters a pastor who, despite a past in which he was a drug dealer and convict, is leading a ministry that serves the poor and destitute. The book alternates between these two worlds, between these two faiths and Albom’s attempts to get to know both of the men.

Have a Little Faith is a well-written and interesting book that has already been widely praised. The endorsements on the book’s cover range from Bob Dole to Bishop T.D. Jakes; from Rabbi Harold Kushner to Coach Tony Dungy. The book reflects the diversity of the endorsers, seeking to emphasize what unites these faiths and all others. It is a defense of the kind of faith that is so popular today-a type of religious belief that de-emphasizes distinctives and plays up the importance of unity. It is a book about religion, about faith in general, more than it is a book about the Christian faith. Unfortunately but undoubtedly, it is a book that could easily comfort a person in a faith that excludes Jesus Christ. And in that way it is a book that misrepresents the Bible, for the Scriptures will not allow for such a faith. The Bible demands exclusivity, it demands that we understand that Jesus Christ is the only way to the Father.

So I guess the irony in Have a Little Faith is that the unity Albom purports to find between all faiths is a unity that comes at the expense of at least one of those faiths. It is a unity that cannot be sustained or supported by one who holds fast to the Bible. This is a book that makes for a quick and enjoyable read, but in its moral, its great theme, it falls tragically flat. It tickles the ear of those who read it, but does not strike straight to the great truths of the Christian faith.