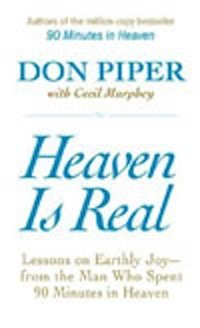 Become a Patron
Don Piper was relatively unknown for even a couple of years after writing 90 Minutes in Heaven. But something must have happened, because now it seems that the longer his book sits on the shelves, the more it picks up steam. It has now sold well over a million copies and shows few signs of abating anytime soon. It is still sitting at the #2 spot in the softcover non-fiction portion of the New York Times list of bestsellers. Piper has made appearances on countless talk shows and has taken his message to millions. His message is this: heaven is real.

This is a message that should, by rights, make me glad. But there is a small problem. Here is how the book begins: “Heaven is real. I know it because I have been there and back.” 90 Minutes in Heaven described Piper’s supposed death, ascension to heaven, and return to earth. In that book he describes heaven as he experienced it and how he has since built a ministry around it. He now seems to be known as the Minister of Hope and the hope he provides is the hope of heaven through his own experience. Since the publication of 90 Minutes in Heaven he has written a devotional book based on his experiences in heaven and has now returned with Heaven is Real.

Ultimately I couldn’t help but feel that Heaven is Real is a self-focused book rather than a gospel-focused book. Though Piper turns often to his experience of being in heaven, even this experience is often just a bridge to discuss some aspect of his own life. Time and time again he prints letters sent to him from people who read 90 Minutes of Heaven and wished to lavish him with praise. Time and again he shares conversations he had with people who identified with his experience and wanted to thank him for writing it. His motives in sharing all of these stories may be sincere, but it certainly begins to feel after a while that he is heaping praise upon himself. I was left with the distinct impression that this book is not only a follow-up to his previous book, but almost an advertisement for it. It’s long, it’s tedious and it’s really quite difficult to read. This book is described in the subtitle as being “Lessons on Earthly Joy,” and this in instructive. The chapters do seem akin to lessons. The book does not seem to build from the first chapter to the last. Rather, the teaching seems a bit disjointed, disconnected from what has gone before and from what will follow.

“Strike while the iron is hot!”, they say, and heaven is hot at the moment. After reading Heaven is Real I’m not convinced that Piper really had a book in him when he began to write this one. The teaching is simplistic and far too human. It sounds like it would come from the lips of Dr. Phil sooner than from the lips of Jesus. Piper clearly attempts to bring sense from suffering. But in that regard it fails. When I compare it to a title like Polishing God’s Monuments by Jim Andrews, a book that had a similar goal, well, there really is no comparison. While this may be the purpose of the book, it is written almost as a follow-up to 90 Minutes in Heaven–as a way of making sense of the success of that book rather than of making sense of the supposed journey to heaven.

Too long, too boring, too man-centered and too much like an infomercial, this book is a near-complete waste of time. Avoid it.