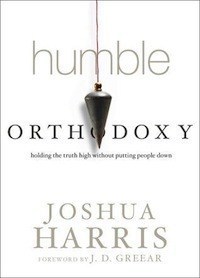 Buy from Amazon Buy from WTS Bookstore
In 2010 Josh Harris released Dug Down Deep, a book concerned with sound doctrine. He encouraged the reader to unashamedly embrace that much-maligned word theology and to “dig deep into a faith so solid you can build your life on it.” In the final chaper he called Christians to a “humble orthodoxy” and many considered this the book’s greatest strength.

Today’s marks the release of Harris’ new book Humble Orthodoxy. This is a short volume that takes the content of that final chapter and expands on it. Though there is a good bit of overlap between the two, Humble Orthodoxy stands on its own merit.

Harris’ desire in this book is to encourage Christians to hold the truth high without putting people down. He calls for Christians to be guided by both truth and love, to be guided in equal measure by orthodoxy and humility, qualities that are complementary, not in opposition to one another. As J.D. Greear says in his foreword, “Getting doctrine right is a matter of life and dead, but holding that doctrine in the right spirit is essential too. A great deal of damage is done by those who hold the truth of Christ with the spirit of Satan.”

The book begins by setting the context and explaining the dilemma. “One of the problems with the word orthodoxy is that it is usually brought up when someone is being reprimanded. So it has gotten a bad reputation, like an older sibling who is always peeking around the corner, trying to catch you doing something wrong. … I don’t know any other way to say this: it seems like a lot of the people who care about orthdoxy are jerks.” And here he begins to suggest the solution: a humble orthodoxy, caring deeply about truth, but defending and sharing this truth with compassion and humility. “Whether our theological knowledge is great or small, we all need to ask a vital question: What will we do with the knowledge of God that we have?” The Bible does not allow us to choose between orthodoxy and humility, but insists that we need both in equal measure, and assures us that through the Holy Spirit we can be humbly orthodox. I have always loved this quote from John Stott which speaks to this very thing:

Thank God there are those in the contemporary church who are determined at all costs to defend and uphold God’s revealed truth. But sometimes they are conspicuously lacking in love. When they think they smell heresy, their nose begins to twitch, their muscles ripple, and the light of battle enters their eye. They seem to enjoy nothing more than a fight. Others make the opposite mistake. They are determined at all costs to maintain and exhibit brotherly love, but in order to do so are prepared even to sacrifice the central truths of revelation. Both these tendencies are unbalanced and unbiblical. Truth becomes hard if it is not softened by love; love becomes soft if it is not strengthened by truth. The apostle calls us to hold the two together, which should not be difficult for Spirit-filled believers, since the Holy Spirit is himself ‘the spirit of truth,’ and his first fruit is ‘love.” There is no other route than this to a fully mature Christian unity.

Harris lays out two alternatives to humble orthodoxy. The first is arrogant orthodoxy, where our doctrine is correct but we are unkind and unloving, where we are self-righteous and spiteful in our words, attitudes and behaviors. “If anyone thinks arrogant orthodoxy doesn’t exist, he’s never read the comments section of a Christian blog.” Touche. The other alternative is humble heterodoxy where a person abandons orthodox Christianity but does it very nicely. The temptation for Harris, for myself, and for most of those who will read this review is toward the first of these alternatives, to pursue orthodoxy at the expense of love. “You and I need to contend for the truth. But there’s a fine line between contending for truth and being contentious.”

The driving passion behind our pursuit of biblical orthdoxy is “not to prove ourselves more right or better than someone else but to better worship the holy God, the one who forgives and accepts us for Christ’s sake alone.” He looks to Tim Keller and says “if we make a good thing like correct theology the ultimate end—if being right becomes more important to us than worshiping God—then our theology is not really about God anymore. It’s about us. It becomes the source of our sense of worth and identity. And if theology becomes about us, then we’ll despise and demonize those who oppose us.”

Thus the solution to arrogant orthodoxy is not less orthodoxy, but more. The more we know of God, the more we love and trust him, the more humble we will be before him.

This is a book that I would love to put in the hands of a lot of people I have encountered over the years. First and foremost, though, it is a book I needed to read. It is a book I need to read again. It is a book I plan to read regularly. It rebuked, encouraged and challenged me in very helpful ways. If you have a blog or you regularly peruse blogs (especially if you comment on them), if you just plain love theology and desire to believe what is right and true, then do yourself a favor and read it as well.