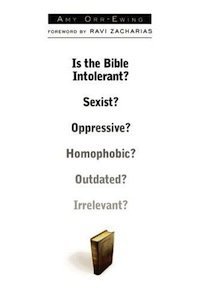 The Bible has long been the world’s best-selling book. While it does not appear on the bestseller lists, year after year, generation after generation, it continues to sell more copies than any other book. While the Bible continues to sell, it does not appear that many more people are reading it now than in previous generations. Rather, knowledge of the Bible is reaching what is surely the lowest point since the years following the Reformation when it first became widely available. Even many who profess to be Christians know the Bible only moderately better than their unbelieving friends and neighbors.

Within our society there is a growing belief that the Bible is a book of intolerance. People regard the Bible as a book of moral lessons that are relevant only within particular situations and often fixed within a particular cultural context. The Bible is regarded as a book that is increasingly irrelevant.

It is with this mindset in view that Amy Orr-Ewing wrote Is The Bible Intolerant?. The cover of the book asks, “Is the Bible intolerant? Sexist? Oppressive? Homophobic? Outdated? Irrelevant?” These are all charges that almost any Christian has heard leveled against Scripture at one time or another. Orr-Ewing is convinced that these are legitimate questions and that a Christian should not be afraid to search the Bible and to seek out answers that will satisfy. “That is what this book is all about…I have taken the ten questions about the Bible that have been asked most frequently in my experience and have attempted to look for some answers” (12).

Is The Bible Intolerant? begins with an examination of our cultural context which goes so far as to deny that we can know what happened in history and which scoffs at our ability to know and understand the Scriptures. From there the author moves to particular issues regarding the manuscripts of the Bible and criteria for canonicity. The last few chapters deal with particular issues that cause unbelievers and skeptics to struggle with Christianity. The questions the author addresses are as follows: Isn’t it all a matter of interpretation?; Can we know anything about history?; Are the biblical manuscripts reliable?; What about the canon?; What about the other holy books?; Isn’t the Bible sexist?; What about all the wars?; Isn’t the Bible out of date on sex?; How can I know?.

This book is an intellectually-stimulating (and intellectually-satisfying) examination of each of these ten questions. It is easy to see the influence of the thought and ministry of Dr. Ravi Zacharias within this book and, in fact, Orr-Ewing oversees the apologetics training program for the Zacharias Trust. The one unfortunate exception is the chapter dealing with sexism. While the other chapters are all quite consistent with Scripture, this one bypasses the clear teaching of the Bible regarding the role of women in ministry and makes the common error of arguing from the lesser to the greater. While paying only scant attention to Paul’s teaching in the epistles, she focuses on Priscilla, Phoebe and Junias, attempting to prove from these examples that women had equal spiritual leadership in the church as men. Having examined the role of various women in the New Testament, she concludes “The apostle Paul, who is often demonized as being sexist, in fact freely ministered alongside women, and the two passages in his writings which are sometimes taken as a blanket denial of female ministry need to be seen in this broader perspective” (93). While Christians should not discount the fact that Paul did minister alongside women, it is important that we begin with what Scripture teaches plainly and allow this to shape and form our perspective. I was disappointed to see the author tacitly suggest that people suggest that Paul teaches “a blanket denial of female ministry” as this is, in my experience, simply not true. Most Christians affirm that there are many avenues of ministry open to women. The author should have clarified that the issue is not ministry in general, but those specific ministries that would require a woman to teach and exercise authority over a man.

Orr-Ewing is not completely clear in suggesting the intended audience for her book. Still, it seems that she is hoping that this book will be read by skeptics, for she concludes with a heartfelt plea that the reader will hear God’s voice and open the door to Him (Revelation 3:20). And so I was faced with the question of whether or not I would hand this book to an unbelieving friend. Based on nine of the chapters I would gladly do so. Unfortunately, the chapter on sexism is so poor that I would hesitate to recommend the book since doing so would require a caveat that might only add to the confusion of one who was seeking to know more about Scripture. And it is a shame, for apart from that significant mis-step, this is a good book. It is one that may prove beneficial to a discerning believer, but I would not recommend it for wider use than that.