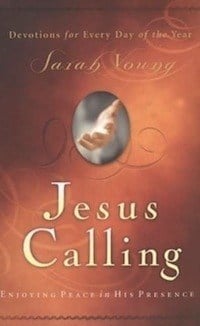 I had no knowledge of either the book or the author when I began reading Sarah Young’s Jesus Calling (having been asked by some of the readers of this site to do so). I had seen the book as a fixture on the Christian bestselling lists, but had never taken a look at it. The first thing I learned is that it has over 450 reviews on Amazon where it is holding down a 5-star average, something that is no small accomplishment. I downloaded it to my Kindle and began to read.

Sarah Young is the wife of a third-generation missionary to Japan who has earned post-graduate degrees from Covenant Theological Seminary in St. Louis, a Presbyterian seminary. Her book is a devotional, a year’s worth of short reflections on the Christian faith. But it has one major, all-important twist.

This is a book about experiencing the Presence of God (Presence is always capitalized in the book). It is about growing closer in relationship to the Lord, something every Christian craves. Young uses Presence to describe a very tangible feeling of God’s presence. Here is some background, the first time she encountered this Presence:

One night I found myself leaving the warmth of our cozy chalet to walk alone in the snowy mountains. I went into a deeply wooded area, feeling vulnerable and awed by cold, moonlit beauty. The air was crisp and dry, piercing to inhale. Suddenly I felt as if a warm mist enveloped me. I became aware of a lovely Presence, and my involuntary response was to whisper, ‘Sweet Jesus.’ This utterance was totally uncharacteristic of me, and I was shocked to hear myself speaking so tenderly to Jesus. As I pondered this brief communication, I realized it was the response of a converted heart; at that moment I knew I belonged to Him. This was far more than the intellectual answers for which I’d been searching. This was a relationship with the Creator of the universe.

Influenced by authors such as Catherine Marshall and Andrew Murray, Young continued to pursue this Presence of God, seeking to learn how to continually feel or sense God’s presence. She grew in her love for God and grew in her desire to spend time with him, speaking to him in prayer and hearing from him through the Word. It was in 1992 that she received a copy of God Calling, “a devotional book written by two anonymous ‘listeners.’ These women practiced waiting quietly in God’s Presence, pencils and paper in hand, recording the messages they received from Him. The messages are written in the first person, with ‘I’ designating God.” This book became a treasure and a textbook.

The following year, I began to wonder if I, too, could receive messages during my times of communing with God. I had been writing in prayer journals for years, but that was one-way communication: I did all the talking. I knew that God communicated with me through the Bible, but I yearned for more. Increasingly, I wanted to hear what God had to say to me personally on a given day. I decided to listen to God with pen in hand, writing down whatever I believe He was saying. I felt awkward the first time I tried this, but I received a message. It was short, biblical, and appropriate. It addressed topics that were current in my life: trust, fear, and closeness to God. I responded by writing in my prayer journal.

You will not be surprised to learn that the content of this book, each of the devotionals, is a message Young has received from the Lord—a message meant to provide a deeper experience of Jesus’ Presence and Peace. “This practice of listening to God has increased my intimacy with Him more than any other spiritual discipline, so I want to share some of the messages I have received. In many parts of the world, Christians seem to be searching for a deeper experience of Jesus’ Presence and Peace. The messages that follow address that felt need.”

We cannot miss this. As I have spoken to others about the book, I’ve heard some people say that this book is written as if Jesus is speaking to the reader. But it’s important to know that Young makes a far more audacious claim—this is Jesus speaking, through her. The messages he has given her, she now passes on to us.

This is a very good time to pause and consider this claim. Sarah is claiming some kind of new revelation from God. She is saying that God speaks to her and that she then passes these messages to others. Immediately we need to ask what she believes about the Bible. Is she claiming that these messages are equal to Scripture? That they trump Scripture?

She makes no such claim; not directly, anyway. At one point she says, “I knew these writings were not inspired as Scripture is, but they were helping me grow closer to God.” Later she says “The Bible is, of course, the only inerrant [without error] Word of God; my writings must be consistent with that unchanging standard.” But this is all she says. While she clarifies that her writings must be subservient to the Bible, she does not actually tell us what they are or how we are to regard them. Are they authoritative? Are they in any way binding on her or on us? If they are not inspired and not inerrant, what exactly are they? There are no answers forthcoming because immediately Young begins to share those words of God as daily devotionals, saying “I have continued to receive personal messages from God as I meditate on Him. The more difficult my life circumstances, the more I need these encouraging directives from my Creator.”

James Montgomery Boice once said that the real battle in our times would not be the inerrancy or infallibility of Scripture, but its sufficiency—are we going to rely on the Bible or will we continually long for other revelation? In Jesus Calling we see this so clearly. Young teaches that though the Bible is inerrant and infallible, it is insufficient. It was not enough for her and, implicitly, she teaches that it cannot be enough for us. After all, it was not reading Scripture that proved her most important spiritual discipline, but this listening, this receiving of messages from the Lord. It is not Scripture she brings to us, not primarily anyway, but these messages from Jesus.

On this basis alone this book is very suspect and needs to be treated with the utmost care. Young offers us words that she insists come straight from the Lord. But she gives no proof that we should expect the Lord to speak to us this way; all she offers is her own experience of it. At this point we are left with a few options. We can stop reading altogether, we can continue to read while rejecting her claims that these are words from the Lord, or we can read and take her at her word. Personally, unless reviewing the book, I would abandon it immediately. If she claims to be speaking Jesus’ words, I am no longer interested. However, for the sake of reviewing it, I continued to read.

Young offers a years’ worth of devotionals, all of which are written in the first person, as messages from Jesus. Each of them is followed with a few Scripture passages. Here is the first half of the devotional for January 8:

It is interesting that the majority of the devotionals are affirmations rather than commandments which means that the book tends to be more descriptive than prescriptive. It is less about Jesus telling how we are to live, but more about who he is, who we are, and how to enjoy his Presence. It is notable that these affirmations span only a very narrow range of the Christian experience. It is equally notable that many of Jesus’ words sound very little like what he says in the Bible. For example, “Let the Light of My Presence soak into you, as you focus your thoughts on Me.” And shortly after, “Learn to hide in the secret of My Presence, even as you carry out your duties in the world.” I do not even know what that means or how it might be applied. There is no clear command there for me to obey and no clear word about who Jesus is.

Jesus Calling is, in its own way, a very dangerous book. Though the theology is largely sound enough, my great concern is that it teaches that hearing words directly from Jesus and then sharing these words with others is the normal Christian experience. In fact, it elevates this experience over all others. And this is a dangerous precedent to set. I see no reason that I would ever recommend this book.