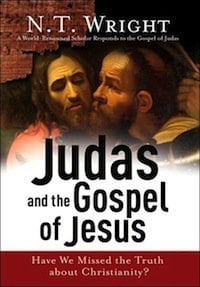 Buy from Amazon
The Gospel of Judas has had its fifteen minutes of fame. It is but another in an endlessly long line of stories or documents meant to shake the foundations of the Christian faith. Like its many predecessors, it gave National Geographic and anti-Christian authors an opportunity to voice their dissension with the biblical story of Jesus. A book titled The Gospel of Judas shot to near the top of the bestsellers lists and nearly as quickly, shot straight back down. Still, while its popularity was short-lived, it allowed Bart Ehrman and other revisionists a chance to laud the epistle for its new insights into the life of Christ. Surely Ehrman forever cast doubt upon his credibility as a historian when he blathered, “(The Gospel of Judas) is one of the greatest historical discoveries of the twentieth century. It rivals the finding of the Dead Sea Scrolls or the Gnostic Gospels of Nag Hammadi.”

National Geographic describes the importance of the document in this way: “The Gospel of Judas gives a different view of the relationship between Jesus and Judas, offering new insights into the disciple who betrayed Jesus. Unlike the accounts in the canonical Gospels of Matthew, Mark, Luke, and John, in which Judas is portrayed as a reviled traitor, this newly discovered Gospel portrays Judas as acting at Jesus’ request when he hands Jesus over to the authorities.” A classically dualistic, gnostic document, The Gospel of Judas presents a Jesus who is seeking to escape from the corruption of this physical world and asks Judas to betray Him so He can be free of this wickedness. Judas complies and shows himself to be a hero, rather than a villain. No longer the betrayer, He is a faithful friend to Jesus Christ.

Renowned New Testament scholar N.T. Wright is the first Christian to my knowledge to write a thorough refutation of the teachings of The Gospel of Judas. Judas and the Gospel of Jesus is due for publication in October of 2006 and will be published by Baker Books. It is a short book, weighing in at only 144 pages, but provides a thorough treatment of the subject matter.

Wright is fair to this newly published document. He does not say that there is no value in The Gospel of Judas for surely there is, for it tells us much about the gnosticism that was a great opponent of early Christianity. It gives historians access to an authentic, original document. But it tells us nothing about the real Jesus and the real Judas. Those who would have us believe that this letter provides details about the real life of the real Jesus can be little more than revisionists. Wright shows that such people believe in what he calls “the new myth of Christian origins.” This myth, popularized by men such as Bart Ehrman, has three main teachings: first, Jesus was not as the canonical gospels portray Him; second, there were a great many different varieties of early Christianity, and they produced a large number of different “gospels,” all of which circulated among Christians more or less unchecked; third, when Christianity became consolidated in the fourth century, many teachings about the “true” Christian faith were rejected.

“Classic Christianity,” he says, “has a lot more life and promise than have ever been imagined by those who propose the new Myth, or by those who offer newly discovered gnostic texts as the panacea for our ills. It is a shame that the churches have been so muzzled, so often self-blinded to the full dimensions of the gospel they profess, the gospel of Jesus himself.”

Through this short book, Wright asks good questions and insightfully shows where The Gospel of Judas simply cannot be held as equal in any way to Scripture. He shows himself to be a New Testament scholar the equal of any involved in promoting this new gospel. While the document appears to be genuine, it is little different and little more significant than the multitudes of other gnostic writings which have come down to us, even two millenia later.

It is perhaps somewhat ironic that N.T. Wright, who has reimagined and reinvented many of the teachings of Paul (and thus Jesus), would be the first to make a stand for the truth against others who would seek to reinvent Jesus. Unfortunately, Wright’s New Perspectives are glimpsed, even if only dimly, through much of the text of this book. Still, he offers a compelling response to Ehrman and others and one well worth reading. I would tend to believe that, for most people, The Gospel of Judas is best ignored. It offers little that would be of interest to the average person. For those who do have interest in it, Judas and the Gospel of Jesus will no doubt prove an interesting response to the irrational views espoused by those who wish to reinvent Christianity and to cast doubt upon Scripture.

* Please do not consider my positive statements about this book to be an endorsement of N.T. Wright’s entire body of work, and especially of his New Perspective on Paul. Don’t accuse me of any of those charges of Guilt By Association!