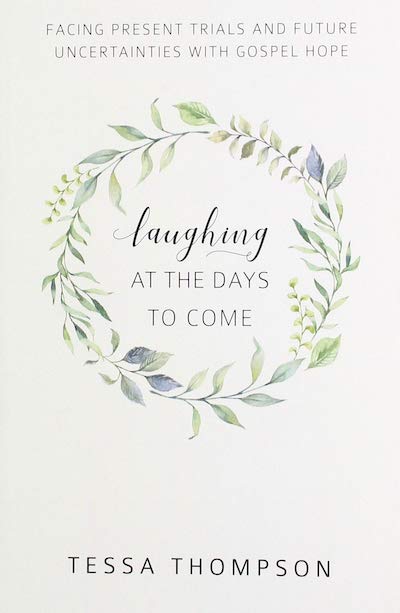 A book about suffering is usually born from adversity in the life of the author, and that’s exactly the case with Tessa Thompson’s Laughing at the Days to Come: Facing Present Trials and Future Uncertainties with Gospel Hope. When she was in her mid-teens, she was diagnosed with Neurofibromatosis Type 2 (NF2) and began to lose her hearing. Her father had been diagnosed a short time before, so she had been a first-hand witness to his struggles to adjust to a difficult new reality. Then, sure enough, her hearing began to fade as well so that she, too, was soon completely deaf. This trial, as well as some others that appeared a little later in life, form the backdrop for her story.

She says rightly that “It is times like these, when our hearts are fragile, our circumstances grim, and our futures uncertain, that the enemy of our souls loves to come and plant seeds of destruction in the soil of our hearts. And unless we are vigilantly working to keep the soil pure, the remaining sin within us will jump at the chance to water those seeds.” Indeed, her first instincts were to blame God for her loss. She knew the words of Job, “The LORD gave, and the LORD has taken away; blessed be the name of the LORD.” But before she could echo those words from the heart, she “needed to know more about His character and, particularly, His countenance. Was He sympathetically looking down on me as a father who longs to comfort his injured child? Was He angry with me, and taking delight in my suffering? Was He indifferent, turning His face away because He had other things to attend to?” She had to know about the character of this God who would permit something she would never have chosen for herself.

Then one day a wiser older woman handed her a little piece of paper with this one Scripture verse written on it: “Strength and dignity are her clothing, and she laughs at the time to come” (Proverbs 31:25). As Thompson pondered these words, she found them deeply affecting. “Here was something valiant. Here was a vision for a life that was thriving not only amid the challenges and frustrations of today but was also able to ponder the days to come—unknowns, changes, trials, and all—and simply laugh. And this laughter was not a doubt-filled, Sarah-like laughter of unbelief (more on that in a moment). This laughter was flowing out of a strong and wise woman who feared the Lord. This was the laughter I needed if I was going to endure a progressive neurological disease in a way that honored God. With this noble vision in mind, I pressed on.” In a sense these words became a theme verse for her life—and the theme for her book.

Laughing at the Days to Come is a book about embracing and enduring life’s trials with divine joy. It is about gaining the kind of vision of that Proverbs 31 woman who can look into an unknown future and a long path of suffering and still rejoice. I think it’s fair to say that it’s written primarily for women, but there is no reason a man can’t read it and benefit just as much. Its great strength is not the story it tells, but the doctrine it teaches. Thompson lays a rock-solid foundation and one capable of supporting any Christian through any suffering. In the first few chapters she writes about the notion of finding joy in a difficult future and shows how Christians really can laugh with joy and confidence as they face the unknown. She then turns to truths about the character and work of God—the kind of truths necessary to trust and honor him through trials. The final few chapters focus on the kind of life the Christian can live even through great difficulties.

Laughing at the Days to Come is an excellent book and one that will bring a lot of comfort to Christians as they endure the trials and testing that life inevitably brings. Thompson has already been where she calls her readers to go, and serves as a trusted guide. Best of all, she doesn’t guide her readers to her own experiences or her own wisdom, but she guides them to the timeless, steady truths of God’s Word.