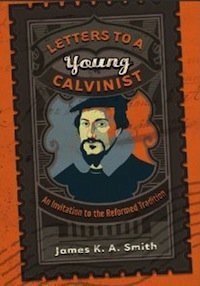 Buy from Amazon Buy from WTS Bookstore
There are many books out there that describe Reformed theology and that invite people to become part of the Reformed tradition. However, most of these books are a product of the years before the advent of this young, restless, Reformed reality that is all the rage today. Most such books predate the New Calvinism.

New to the field, and largely distinct from the rest, is Letters to a Young Calvinist by James K.A. Smith. This is one of the few books to speak directly to this new young, restless, Reformed movement. Written in the form of letters from a mentor to a young man who is investigating Reformed theology, the book offers a winsome 125-page introduction to the tradition and to the way it works out in real life. The author says “These letters don’t offer an apologetic defense of Calvinism, trying to defend it against all comers; rather, I envision the addressee of these letters as someone who has already become interested in this tradition and is looking for a guide into unfamiliar territory.”

Smith leads the young recipient of these letters into the tradition in a systematic way. He begins with words of welcome, expressing the way that Reformed theology leads us to seek out and discover deep wells of the Scripture. For example, “I think it is one of the hallmarks of the Reformed tradition that it has a long history of encouraging curiosity about creation. Unlike some of the places you and I have been, which really discourage questioning in order to get people to toe the party line, the Reformed tradition has long encourages a kind of holy intellectual riskiness.”

He warns of one of the most perilous sins of the Reformed: “Now is as good a time as any to warn you about one of the foremost temptations that accompanies Reformed theology: pride. And the worst kind of pride: religious pride (one of Screwtape’s letters speaks quite eloquently about this). This is an infection that often quickly contaminates those who discover the Reformed tradition, and it can be deadly: a kind of West Nile virus.”

Sooner or later, though, the author has to take sides in some of the issues that remain unresolved across the spectrum of the New Calvinism. And here is where he will inevitably lose some of his readers. The first of these issues regards confessions. Many who consider themselves Reformed today are explicitly non-confessional, meaning that they do not adhere to any of the catechisms or confessions that have long been Reformed hallmarks. Following this are a few discussions about the role of covenant within the tradition. Where Smith is sure to alienate even more readers is in his parenthetical attempt to suggest that Reformed theology ought to lead to an egalitarian understanding of gender roles.

As I look back on this book I see both strengths and weaknesses. The epistolary form is a wonderful choice. The tone is humble and helpful. The majority of what Smith teaches lines up well with what I believe. But as a Baptist I had to disagree with, well, a good portion of it. And looking at the endorsements, I can see that others disagreed with him as well. Two of the book’s endorsers, Tullian Tchividjian and Michael Horton offer caveats within their blurbs (Tchividjian: “ No one will agree with everything here, but what I appreciate…” Horton: Most of the time I cheered ‘Amen!’ as I read these letters, but even when I disagreed, I appreciated…”). In fact, conspicuous by their absence from the list of endorsers are any of the Baptist leaders of this New Calvinism.

So I guess I regard the book as a bit of a mixed bag. I felt that it got weaker as it went on. The best parts were largely the earliest parts. Of course if you are a paedo-baptist, if you are confessional, if you are covenantal, and/or if you are egalitarian, you’ll probably agree with much more of it. But maybe that’s the point. Thus far this young, restless, Reformed movement has been very ecumenical, with most people focusing on the commonalities, and especially the common understanding of God’s sovereignty in salvation. Maybe the movement has grown up enough that people are now ready to begin discussing more of the particulars. And it’s in the particulars that we are bound to find the most disagreement.