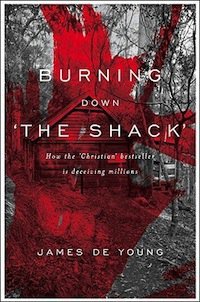 Buy from Amazon
If ever there was a book destined to see a lot of negative reviews it has to be Burning Down The Shack. Written by James De Young, professor of New Testament Language and Literature at Western Seminary, Portland, Oregon, this book takes on the bestselling novel The Shack, telling, according to the subtitle, how “The ‘Christian’ Bestseller is Deceiving Millions.” The Shack has a huge community of devoted fans and many of them will be distressed to see this book, and especially so if it begins to sell well and gain some kind of prominence.

It seems that I should begin this article by reviewing the facts of The Shack. But surely you know them already. The Shack has sold millions and millions of copies, has been translated into a host of languages and has remained on the besteller lists for over 100 weeks; it was self-published by an unknown author and an unknown publishing company and had an initial marketing budget of just a few hundred dollars; it is largely a word-of-mouth success that has seen many pastors buy boxes to give away within churches; it is, in short, an absolute phenomenon, the kind of phenomenon that will some day be a case study in a marketing text book.

This would all be well and good if The Shack was a good book. Sadly, though, it is not. Not only is it substandard in its writing, but more distressingly it teaches theology that is at times sub-bibical and at other times fully anti-biblical. Among its predominant themes are the Trinity, the character of God and the nature of good and evil–themes that strike to the very heart of the Christian faith. And in so many ways it is fully opposed to what is true.

James De Young writes from an interesting perspective–that of a former friend, or acquaintance at least, of Paul Young. He begins his book by providing some important but little-known background to The Shack. In April of 2004 De Young attended a Christian think tank and there Young presented a 103-page paper which presented a defense of universal reconciliation, a Christian form of universalism–the view that at some point every person will come to a right relationship with God. If they do not do this before they die, God will use the fires of hell to purge away (not punish, mind you) any unbelief. Eventually even Satan and his fallen angels will be purged of sin and all of creation will be fully and finally restored. This is to say that after death there is a second chance, and more than that, a complete inevitability, that all people will eventually repent and come to full relationship with God. De Young believes that Young’s belief in universal reconciliation is absolutely crucial to anyone who would truly wish to understand The Shack. It is the key that makes sense of the book and the theology it contains. Though far from the only theological problem with the book, it is the one that makes sense of the others.

Needless to say, universal reconciliation is also the theme of De Young’s refutation of The Shack. He seeks to answer big questions such as “What is God like?”, “Why did Jesus Christ die?”, “Does God punish sin?” and “Does mercy triumph over judgment?” Though his questions range far wider than universal reconciliation, in the end most of them lead back to this foundational component of Young’s theology. The author makes it clear that he is not out to attack Young and nowhere does he do this. Instead, he simply seeks to interact with his theology, with what he teaches through his novel. He does this by going through The Shack chapter-by-chapter, showing what Young did well in that portion of the book and then showing from the Bible where he went wrong. It is quite an effective format that refutes and teaches equally well.

While he does all of this, there is a sense in which he inadvertently displays one part of the reason that The Shack has proven so popular. Where Young could use narrative to subtly teach big theological concepts, De Young has to use the theological lexicon. This puts him at an immediate disadvantage. What Young seeks to make so clear through a story, De Young has to make clear through the language of theology. He does this well, but still shows by contrast how powerful narrative can be.

What I can’t quite decide is who the audience is for this book. Burning Down The Shack is 253 pages by the time the reader has finished the appendices and indexes. It is also occasionally heavy, teaching or refuting significant theological concepts. Maybe I am not giving enough credit to those who read and enjoyed The Shack but it seems to me that if you read that novel and took it to be sound theology, you are not too likely to read a 250-page text refuting it. And then there are people like me who read The Shack and were disturbed by it. But we already know The Shack is theologically deceptive, so why would we need to read a book about it? Having said that, the book is currently ranked in Amazon’s top-6000, not a terrible place to be, so I suppose someone must be buying it. I can’t help but think that if it was 100 (or 200) pages shorter it would have a far wider impact. I suspect, though, that it will largely be read by people who already know of the problems with The Shack. That is too bad, really.

Nevertheless, Burning Down The Shack is a solid book and has a lot to commend it. If you are looking for a resource that interacts with The Shack and does so in a way that is more thorough than my review and more discerning than either of the two books titled Finding God in The Shack, this may be just the ticket. Many supporters of The Shack have suggested that it is only Calvinists who dislike the book. I was glad to see that the lone endorsement for Burning Down The Shack is Paige Patterson (certainly no Calvinist) who writes, “[De Young’s] evaluation of the theology and deceit involved in The Shack is on target and critical for today’s world.” Calvinist or not, lover or hater, if you read this book you will benefit from it, I think.