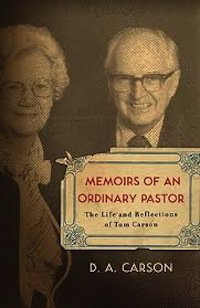 Buy from Amazon Buy from WTS Bookstore
I try not to make a habit of posting book reviews two days in a row, but in this case I felt this book was so special that I needed to bring your attention to it.

There are some Christians whose ministries God blesses in extraordinary ways. They preach to thousands and their books are read by millions. But this is the exception far more than the rule. Most Christians labor in relative obscurity, largely unseen and unnoticed. In the past couple of years I have read biographies of some truly great men—William Wilberforce, William Tyndale, George Whitefield, Jonathan Edwards. It is good to study the lives of great men and to seek to understand how they were able to gain such prominence. Biographies teach so much about character, opportunity and just plain hard work. Rarely, though, do we read biographies of ordinary men—men who gained no earthly fame and who lived their lives in the shadow of obscurity. In Memoirs of an Ordinary Pastor, theologian D.A. Carson shares the life of his father, Tom Carson. He was an ordinary man, an ordinary pastor, who labored in a unique mission field surprisingly close to home.

Tom Carson served the Lord in Quebec—the French-speaking province in Canada. He ministered there during an extraordinary time where the population transitioned from being among the most religious people on earth, held firmly by the grasp of the Roman Catholic Church, to a population almost entirely secular. He labored there faithfully, despite adversity and despite both pain and failure.

Part of the appeal of this book is its sheer “ordinary-ness” (I couldn’t find just the right word so decided to coin one). I may have to admit a measure of bias toward the book as the area in which Carson labored is Les Cantons de l’Est or the Eastern Townships. This is the region of Quebec where my mother grew up and it is not far from Montreal where my father was born and raised. The story takes place in a familiar setting, something I’ve never before experienced in reading a biography. Yet there was also comfort in the ordinary nature of Tom Carson himself. He was not extraordinarily gifted—not the kind of man who typically merits a biography. Instead, he was a very ordinary person, one who labored long and who labored faithfully. The power of this biography is not in the great accomplishments of its subject but instead in his faithfulness and his enduring love for the Lord.

The book closes with some beautiful and memorable words that aptly summarize his life and ministry.

Tom Carson never rose very far in denominational structures, but hundreds of people … testify how much he loved them. He never wrote a book, but he loved the Book. He was never wealthy or powerful, but he kept growing as a Christian: yesterday’s grace was never enough. He was not a far-sighted visionary, but he looked forward to eternity. He was not a gifted administrator, but there is no text that says “By this shall all men know that you are my disciples, if you are good administrators.” His journals have many, many entries bathed in tears of contrition, but his children and grandchildren remember his laughter. Only rarely did he break through his pattern of reserve and speak deeply and intimately with his children, but he modeled Christian virtues to them. He much preferred to avoid controversy than to stir things up, but his own commitments to historic confessionalism were unyielding, and in ethics he was a man of principle. His own ecclesiastical circles were rather small and narrow, but his reading was correspondingly large and expansive. He was not very good at putting people down, except on his prayer lists.

When he died, there were no crowds outside the hospital, no editorial comments in the papers, no announcements on the television, no mention in Parliament, no attention paid by the nation. In his hospital room there was no one by his bedside. There was only the quiet hiss of oxygen, vainly venting because he had stopped breathing and would never need it again.

But on the other side, all the trumpets sounded. Dad won entrance to the only throne-room that matters, not because he was a good man or a great man—he was, after all, a most ordinary pastor—but because he was a forgiven man. And he heard the voice of him whom he longed to hear saying, “Well done, good and faithful servant; enter into the joy of your Lord.”

Oh, that each ordinary pastor and each ordinary Christian may be so faithful and enter into that same reward. I can only hope that many young pastors will commit to reading this book. But it is not just they who can benefit. Any Christian will appreciate reading about this ordinary man who somehow seems so much like you and me. Though it is good to read about Calvin and Edwards and Whitefield, men who had extraordinary ministries and who continue to exert a worldwide impact through their writing and preaching and evangelistic efforts, it is good to see as well how God has more commonly used ordinary men to do His work. Tom Carson was an ordinary pastor, a man who struggled with depression and who saw his ministry bear visible little fruit, but he was a man who remained faithful and who served the Lord with all his heart. More aware of his faults than his strengths and more prone to humility than pride, there is much we can learn from this man.

Memoirs of an Ordinary Pastor is a book I enjoyed reading from the first word to the last. It strengthened me, challenged me, moved me (to tears, even!) and ministered to me. This book is a gift to the church and I hope that you will read it too. You’ll be glad you did.

The book is currently available for pre-order but it is already printed and ready to go. It should ship in the next day or two. Order one for yourself and one for your pastor!

If you’re a Westminster Books shopper, you can get it here. Amazon shoppers can click below: